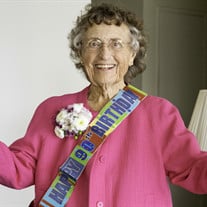 Janet Wallace Stovall (nee Kirk) was born to James and Elizabeth Kirk on 9 October 1928 in Kelty, Fife, Scotland. She passed quietly from this life to her eternal home on the morning of Thursday 18 November 2021 in La Mesa, California. She is survived by her husband Wilburn, son Robert, daughter Lorna, son-in-law John Durschinger, and grandson August Durschinger. As a child in Kelty she enjoyed school and was active in the North Parish Church. Once she completed primary school, she attended the nearby Beath High School where she enjoyed playing tennis and was on the girl's field hockey team for the entire six years, she attended school there. It was there that she developed her lifelong passion for art and friendships that would last equally as long. Her high school years were challenging as World War II raged on with scarcity and sacrifice being the conditions de vie. As the war ended, she enrolled at Moray House School of Education and Sport at the University of Edinburgh. Her arduous daily commute into Edinburgh was well worth the effort as she obtained a degree in education and achieved her lifelong dream of becoming a teacher. She taught in Scotland for a few years but became restless and wanted to strike out on an adventure. Janet heard of an opportunity to teach in the United States for a year under the Fulbright Teacher Exchange Program. She applied and was accepted into the program to begin teaching in the Fall of 1954. As luck would have it, she was sent to a school in San Diego, California where she met Wilburn "Al" Stovall. After her year in San Diego, she returned home to Scotland to teach. It was during that time she saw an advertisement for foreign teaching opportunities with the Royal Dutch Shell Group. She was hired by Shell Oil to teach at schools they operated at their worldwide facilities. Her assignments included two years in Cardon, Venezuela and Doha, Qatar and a year in Casabe, Colombia. During this time, she and Wilburn corresponded and shared short vacations in San Diego, Rome and Scotland. On 22 July 1961, Janet and Wilburn were married at the Fifth Avenue Presbyterian Church in New York City. They honeymooned in New York and Scotland ultimately returning to San Diego to raise their family which went on to include son Robert Kirk (b. 1962), daughters Lorna Elizabeth (b 1963) and Ainsley Fiona (b 1969, d 2020). Janet loved to travel. She travelled to every capitol city in South America and to many places in the Middle East while working for Shell. Meeting new people, visiting with friends, and entertaining visitors from near and far melded beautifully with Wilburn's love of travel. In total, they made 62 transatlantic crossings during their marriage. These included a 1964 visit to Scotland for Lorna's first birthday and returning again in 1965 to stay for a year while Wilburn taught school as an exchange teacher in Kirkcaldy. It included Ainsley's first trip to Scotland at six months old and many other family trips through Europe and Scotland. Janet's last trip was a cruise along the Mexican Riviera in 2019. Throughout her travels, she fiercely held on to her British passport always saying "she was born British so she will die British". Music and art were always a part of her life. She enjoyed music from Hollywood musicals and Lawrence Welk to symphony and opera. The grand old hymns of the Church of Scotland as well as gospel songs were among her favorites. She was a watercolorist in the British tradition and an active member of two local art associations in the San Diego area where she exhibited her works and won awards in many shows. Throughout her life Janet developed and maintained a close personal relationship with Our Lord Jesus Christ. She was guided by His teachings and lived her life accordingly as a beautiful Christian. A graveside service will be held on December 11, 2021 at 1:00 pm at Pool Cemetery in Richards, TX. Memorial condolences may be made to the family at www.shmfh.com.

Janet Wallace Stovall (nee Kirk) was born to James and Elizabeth Kirk on 9 October 1928 in Kelty, Fife, Scotland. She passed quietly from this life to her eternal home on the morning of Thursday 18 November 2021 in La Mesa, California. She is... View Obituary & Service Information

The family of Janet Wallace Stovall created this Life Tributes page to make it easy to share your memories.

Send flowers to the Stovall family.