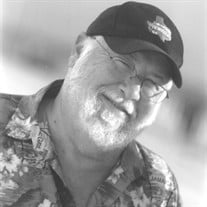 James Eldon "Jim" Meier, 73, of Montgomery died suddenly on Wednesday, October, 7, in the Conroe Hospital. He was a resident of Montgomery and former resident of Spring. Visitation will be from 1:00 to 2:00 pm on Tuesday October 13th at Sam Houston Funeral Home on Hwy 105 in Montgomery. Services will follow at 2:00 pm officiated by Lanny Hallmark, brother-in-law of the deceased. Special music performed by Luke Cipriano and Keely Wilson. Jim will be buried on Wednesday at Antioch Cemetery. in Buna, Texas. Jim was born in Newark, Ohio on November 20, 1946 to Edgar Carl and Ruth Olive McGee Meier. Jim was the retired owner of Meier's Pest Control. He was a wonderful husband, father, gramps, uncle and friend. He loved the outdoors and especially fishing. Most any day you could find him trying out that special lure on the lake. Jim was preceded in death by his parents. He is survived by his wife of 32 years, Sandra Bertram Meier; children: Anthony "Tony" Meier (JoLynn), Ramona Hall, Raymond Hall (Regina), Bryan Chick, and Torri Morell. His sister, Lucinda "Cindy" Alley (Tom) of California and brother, Robert "Bob" Meier of Florida. Grandchildren: Evan, Easton, Zachary, Taylor and Morgan. Special sister, Janet Bertram Hallmark (Lanny) and special nephew, Carl Meier (Penny) as well as numerous extended family members and friends that also mourn the passing of Jim. A donation in Jim's memory can be sent to "Casting for Casey", the children's fishing organization where he was volunteer. He loved teaching kids to fish. Donations can mailed to: Texas Trophy Catfish Association (TXTCA), 24848 Country Oaks Blvd., Montgomery, Texas 77316.

James Eldon "Jim" Meier, 73, of Montgomery died suddenly on Wednesday, October, 7, in the Conroe Hospital. He was a resident of Montgomery and former resident of Spring. Visitation will be from 1:00 to 2:00 pm on Tuesday October 13th at... View Obituary & Service Information

The family of James "Jim" Eldon Meier created this Life Tributes page to make it easy to share your memories.

Send flowers to the Meier family.