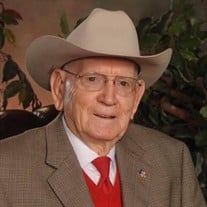 Jack Dempsey Townley, 96, passed away peacefully on June 5, 2021. Jack was born on August 4, 1924 to Richard Harrison and Fannie Dunham Townley in Blanchard, Texas. He grew up during the depression, and joined the US Army in March of 1943. He proudly served his Country during World War 2 in the Central European Theater, serving as an infantryman. He was awarded 3 Bronze Stars, the Silver Star, and several other medals. He returned to Polk County after the war, where he met the love of his life, Georgia Estelle Kelley. They married on April 22, 1947 and had three beautiful children- Jackie, Sandra, and Richard. Jack had many local business interests. He owned and operated the barbershop in the Loman Student Center at Sam Houston State University for over 30 years. Many young men got their first haircut or first military haircut in that barbershop. Many employees and friends came through those doors over the years. Jack was a 65+ year Master Mason at the Grand Lodge of Texas, Forest Lodge #19, as well as a Knights Templar. He never met a stranger- he would figure out who your family was, and there was always conversation to follow. As a member of the "Greatest Generation" Jack was a man of honor, integrity, and had a deep and abiding faith in God. His handshake was his word and bond. He put his faith into action daily. The measure of a life well lived is measured in love, and Jack had so much love to go around. Above all else, he was a cherished husband, Dad and PawPaw. We know there is a celebration going on in Heaven that has left a hole in our hearts. Jack was preceded in death by his parents, his wife, Georgia, their daughter Sandra, daughter and son in law Jackie and Billy Woods, his brother Bay and sister Ida Mae Munson and special friend, Louise Fondren. Left to treasure his memory are his son and wife, Jack Richard and Debbie Townley, granddaughters Kelly King and husband Wade, Stacie Woods, Christie Woods and Colin Guinn, grandsons Greg Townley and Steven Townley and Jennifer Adams. Great grandchildren, Brittanie and Jordan Dugas, Alex Vader and Vince Pale, Ross Vader, Lesley and Jace Zeller, Achillies and Cruz Guinn, Grayson Townley and Great-Great grandchildren Jack and Beaux Dugas, Joey Zeller, and Lorelei Pale, as well as many nieces and nephews. In lieu of flowers, please consider making a contribution to Wesley Memorial United Methodist Church, where Jack was a founding member. Visitation will be Tuesday, June 8th from 5 to 7 pm at Wesley Memorial United Methodist Church. Funeral services will be at 2 pm on Wednesday, June 9th at Wesley Memorial United Methodist Church. Burial will follow in the Adickes addition of Oakwood Cemetery. Memorial condolences to the family may be made at www.shmfh.com.

Jack Dempsey Townley, 96, passed away peacefully on June 5, 2021. Jack was born on August 4, 1924 to Richard Harrison and Fannie Dunham Townley in Blanchard, Texas. He grew up during the depression, and joined the US Army in March of 1943. He... View Obituary & Service Information

The family of Jack Dempsey Townley created this Life Tributes page to make it easy to share your memories.

Send flowers to the Townley family.