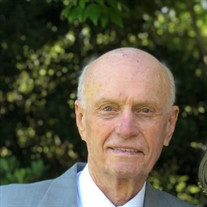 Jack Leroy Siersma was called home to be with his Heavenly Father August 10, 2021, shortly before his 91st birthday. He was preceded in death by his beloved wife Jean, son David and daughter Janice. His surviving family looks forward to the opportunity to honor his life at the Houston National Cemetery later this year when it is safer for loved ones to travel. Jack was born in September 1930 to John H. Siersma and Irene Sawitzky Siersma in Detroit, Michigan, second of five children. After graduating from Warren High School (1949) as a 4 year letterman in 3 sports, Class Treasurer and Salutatorian, he continued his education at the University of Michigan. His Electrical Engineering studies were interrupted his junior year when he was drafted into the US Army, where he served at Fort Bliss in El Paso, Texas and worked on early generation drones during the Korean War. Jack married Jean Boik, his hometown sweetheart in 1954. Following discharge from the Army, they returned to Detroit where he began his career in the automobile industry. In 1960 they moved to Huntsville, Alabama where he enjoyed a brief stint in the space industry. He and Jean loved raising their 3 children in Huntsville and made lifelong friends there. While in Huntsville, Jack returned to the automotive industry as the Quality Control Manager with Chrysler. In 1980, they returned to Michigan with TRW. Jack was later transferred to the TRW Marshall Illinois plant as Plant Manager where he effectively increased the efficiency and organization of the plant before returning to Farmington Hills, MI in 1992. When Jack retired, they moved to Greenville, TN where he was very involved in Notre Dame Catholic Church, the Knights of Columbus, and enjoyed 3 weekly rounds of golf with a great group of guys. They made their final move in 2016 to Montgomery, TX near their surviving daughter, Kathy Wallace and her family. Jack and Jean joined St. Mary Catholic Church in Plantersville, TX. Jack also found some kindred souls at weekly Veterans gatherings. Those who met Jack appreciated his devotion to faith and family, his intellect, humility, and generosity. He was appreciated as that nicely dressed gentleman near the front of the church in any church they attended. Jack is survived by his daughter Kathy Wallace and husband Clarence, their daughters Christi Pafford (husband Michael, daughters Brittni, Brooke, and Bria), Jennifer Smithey (husband Robert, daughter Audrey and son Luke), and daughter Lauren Wallace. Son, David’s, widow, Connie White (husband Ron) and their children Kevin Siersma (daughter Avery), Stephanie Schick (husband Paul, son Benjamin and daughter Juliette), and Amy Rose (husband Aaron and sons Sam and William). Jack was deeply loved and appreciated by his and Jean’s large extended families and will be missed by all who had the pleasure of knowing him. A memorial tree in his honor will be planted at Memory Park in Montgomery, TX.

Jack Leroy Siersma was called home to be with his Heavenly Father August 10, 2021, shortly before his 91st birthday. He was preceded in death by his beloved wife Jean, son David and daughter Janice. His surviving family looks forward to the... View Obituary & Service Information

The family of JACK LEROY SIERSMA created this Life Tributes page to make it easy to share your memories.

Jack Leroy Siersma was called home to be with his Heavenly Father...

Send flowers to the SIERSMA family.