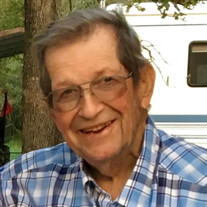 OBITUARY Jack Benford Pursley went home peacefully to be with his Lord and Savior on Friday night, June 18th, 2021, surrounded by his loving family. Jack was born in Huntsville, Texas on September 22, 1937, to Marvin Benford Pursley and Magalea Carter Pursley. He attended Huntsville public schools and graduated in 1955. He played on the 1953 Huntsville Hornet State Football Championship team. He attended Sam Houston State University where he met his beautiful wife, Betty Jo. They were married on July 6, 1956 and would have celebrated their 65th anniversary in July. After graduating from SHSU in 1959, his first daughter was born. He took a teaching job in Mineral Wells where his second daughter was born. In 1963, he began his employment with the Texas Department of Criminal Justice at the Ferguson Unit where his son was born. Jack was employed at TDCJ until his retirement as a Senior Warden in 1993. Jack served on the Huntsville School Board, and was a longtime member and President of the Phelps Water Board. He was passionate about hunting and fishing and spent many hours attending to his cattle on his ranch. He also loved his dog, July. Jack's greatest joy was his family and his three children, and being Big Daddy to his 5 grandchildren and 3 great grandchildren. He is survived by his wife, Betty Jo Danchak Pursley; daughters, Debbie and husband, John Youens; Cindy and husband Galen McElvaney; son, Jack Marvin Pursley and wife, Karen. He is also survived by his grandchildren, Justin McElvaney and wife Hayley; Stacy McElvaney McKee and husband, Daniel; Charles Marvin Pursley and wife Anna, Karmen Pursley and Karley Belle Pursley. He is also survived by his great-grandchildren, Harper McKee, Riley Jack McKee and Natalie McElvaney. He also leaves many other family members and great friends who were like family to him. Visitation for Jack will be held at Sam Houston Funeral Home on Monday, June 21, 2021 from 5 p.m. to 7 p.m. Services will be on Tuesday, June 22nd, 10:00 a.m., at Northside Baptist Church located at 1207 FM 980, Huntsville, TX with Rev. Reagan Cooksey officiating. Burial will follow at Boswell Church Cemetery, 737A Hardy Bottom Road, Huntsville, TX. Pallbearers will be Robert Shaw, Kenny Coleman, Kenneth Street, Wesley Warner, Kent Ramsey and Glen Ray Reader. Honorary Pallbearers will be D.V. "Red" McKaskle, Charles Martin and David Smith.

OBITUARY Jack Benford Pursley went home peacefully to be with his Lord and Savior on Friday night, June 18th, 2021, surrounded by his loving family. Jack was born in Huntsville, Texas on September 22, 1937, to Marvin Benford Pursley and Magalea... View Obituary & Service Information

The family of Mr Jack Benford Pursley created this Life Tributes page to make it easy to share your memories.

Jack Benford Pursley went home peacefully to be with...

Send flowers to the Pursley family.