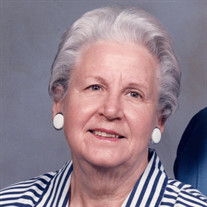 Irene Jaehne Mouser beloved mother, grandmother, and friend went home to be with her Lord and Savior at the age of 93, in Huntsville, Tx. on June 9, 2021. Irene met her husband Leroy Mouser while working at the Houston Police Department. In 1947, Leroy and Irene were married, had three sons, and were married for 55 years. From that family grew three daughters in law, six grandchildren, four great grandchildren and more to come who will continue Irene's legacy of her faith in Jesus Christ, her kindness, generosity, and the contagious joy she brought to others. Irene was proceeded in death by her husband Leroy Mouser, sisters Dot Wilson and Earline Krailo; along with her parents Carl and Minnie Jaehne. Irene is survived by her sons Michael and wife Janet of San Antonio, Tx., Billy and wife Bobbi of Blanco, Tx., Larry and wife Mandy of Houston, Tx. Grandchildren Steven and wife Amber of Leon Valley, Tx., Brett and wife Rebecka of Brownwood, Tx., Brian of Alvin, Tx., Blake and wife Jennifer of Leander, Tx., Joshua of Houston, Tx., and Katelyn of Houston, Tx. Great-grandchildren Jaxon, Callan, Gracelyn and Huxton. She is also survived by her brother Carl Jaehne and wife Laverne of Houston, Tx. Irene leaves behind numerous nieces, nephews, and so many dear friends. Irene's interests included her family, golfing, bird watching (especially her bluebirds), flower gardening, fishing, reading, and playing games with her Elkins Lake friends and family. She was a long-standing Member of the Elkin's Lake Women's Golf Association. The family wishes to express their gratitude to Irene's neighbors, friends, Meals on Wheels, and the Heart-to-Heart caregivers who provided wonderful loving care to Irene throughout these past months. The family will receive friends on Thursday, June 17th from 4:30-6:30pm at Sam Houston Memorial Funeral Home in Huntsville, TX. Funeral services will be held on Friday, June 18th, 10am at Faith Lutheran Church in Huntsville, Tx. with Pastors Robert Hemsath and James Jennings officiating. Interment will be held on Friday, June 18th, 2pm at Woodlawn Cemetery in Houston, Tx. Pallbearers will be Irene's grandsons, nephew Johnny Krailo, and the honorary pallbearer will be her granddaughter. In lieu of flowers, memorial donations may be made to Faith Lutheran Church, your local church or charity of choice. Memorial condolences to the family may be made at www.shmfh.com.

Irene Jaehne Mouser beloved mother, grandmother, and friend went home to be with her Lord and Savior at the age of 93, in Huntsville, Tx. on June 9, 2021. Irene met her husband Leroy Mouser while working at the Houston Police Department. In... View Obituary & Service Information

The family of Irene Alice Mouser created this Life Tributes page to make it easy to share your memories.

Send flowers to the Mouser family.