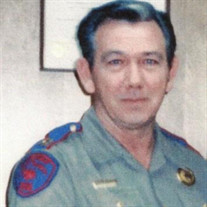 Harry Hartwell Cunningham “Harry” was born August 4, 1942 in San Antonio, Texas. He was raised by his parents Bobby and Ruth Solis. He served in the U.S. Army and was honorably discharged in 1966. Harry graduated from St. Mary's University with his bachelor’s degree and a master’s degree from The University of Illinois Chicago. He was a DPS officer for 30 years and a PCT. 1 Constable for 15 years. Lastly, he retired as a Captain of the Texas Department of Public Safety. Harry had a strong work ethic and desire for justice. When he wasn't working he loved to fish with his son, Roland, watch his grandson play baseball, and he enjoyed watching Nascar. More than anything, Harry loved his family. He and Elva were married for 52 years. Other than his wife, his grandchildren were his pride and joy. There was nothing more important to him than being at PJ’s baseball game, or spending quality time with his granddaughter, Nicole. He loved being a part of her education and helping her further her career any way he could. Much to his joy, he was able to savor precious time with his great granddaughter, Rivers. He was so proud to be a papa and was quick to pull out pictures of them any chance he got. In addition to his parents, Bobby and Ruth Solis, Harry was preceded in death by his brothers, Robert Solis and PJ Cunningham; and his sister, Mona Solis. Harry is survived by his loving wife, Elva Cunningham; sister, Carolyn; brother, Richard; sons, Roland Villarreal and wife Susan, and Israel Villarreal; grandchildren, Nicole Franklin and husband Ford; grandson, PJ Villarreal; and great granddaughter, Rivers Franklin. A Celebration of Life will be held on Friday, June 18th from 5pm-8pm with a Rosary beginning at 7pm at Sam Houston Memorial Funeral Home in Montgomery, Texas. A brunch will be held on Saturday, June 19th from 12pm-2pm at 7 Leguas. To leave condolences for the family, you may visit www.shmfh.com.

Harry Hartwell Cunningham &#8220;Harry&#8221; was born August 4, 1942 in San Antonio, Texas. He was raised by his parents Bobby and Ruth Solis. He served in the U.S. Army and was honorably discharged in 1966. Harry graduated from St. Mary's... View Obituary & Service Information

The family of Harry Hartwell Cunningham created this Life Tributes page to make it easy to share your memories.

Send flowers to the Cunningham family.