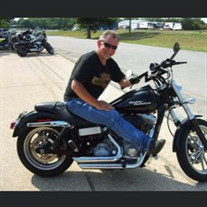 Harry R. Alexander was born on September 19, 1952 to parents Delbert J. Alexander and Elfriede Charlotte Corinth Alexander in Merkel, TX and was taken from us on September 28, 2020. He is survived by his loving wife Yvonne; his brother Ron Alexander and wife Martha of Woodway, TX; nephew Ronnie Alexander and wife Becky and their children Katie and Fox of Waco, TX. He is also survived by Yvonne’s son Bruce and his wife Tamica and their children Ariana, Tamara and Kingston and God-son Jacob, who Harry loved as if they were his own. He is preceded in death by his first wife, Nell Pickle Alexander; father Delbert and wife Florence Alexander of Abilene, TX and mother Elfriede and her husband Weldon Baker of Andrews, TX. Harry had a 29 yr. long career at TDC, which he enjoyed very much. His true passion was riding motorcycles with the Legionnaire’s of Post 95. He was the son of a Legionnaire, was safety officer for the group and was lovingly known as “Uncle Harwy”. Harry was a friend to all and was greatly admired and appreciated for his love of community. His love for animals shown through his life. He rescued every animal that was in need of help. His many pets, Bill, Harley and Grizzbella were lucky to have him, as he was such a kind man in their lives. A memorial service will be held honoring Harry on Tuesday, October 27, 2020 at Sam Houston Memorial Funeral Home in Huntsville, Texas at 2:30 in the afternoon. The family requests that everyone in attendance wear masks. In lieu of flowers, please make donations to Rita B. Huff Humane Society, 530 Bearkat Blvd, Huntsville, TX 77340 or at http://www.rbhhumanesociety.org/.

Harry R. Alexander was born on September 19, 1952 to parents Delbert J. Alexander and Elfriede Charlotte Corinth Alexander in Merkel, TX and was taken from us on September 28, 2020. He is survived by his loving wife Yvonne; his brother Ron Alexander... View Obituary & Service Information

The family of Harry R Alexander created this Life Tributes page to make it easy to share your memories.

Send flowers to the Alexander family.