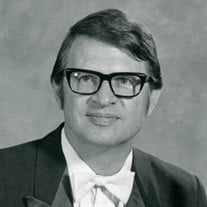 Harley Edwin Rex passed away on November 26, 2020 in Trinity, Texas. Harley was born on March 29, 1930 in Lehighton, Pennsylvania to Harley Russell Cleveland Rex and Marie Daugherty Rex. Harley attended Lehighton schools where he played football on the field and clarinet in the band. On Friday nights he juggled his evening activities accordingly. He graduated from Lehighton High School and spent a year working in a Pennsylvania Poconos resort before entering Mansfield State Teachers College in 1948. He worked his way through college by being dining room manager for 4 years, lining football fields and playing dance band jobs. He graduated as President of his class with a B.S. in Music Education in 1952. That fall he enrolled at the University of Michigan, receiving a Master of Music degree in 1954. He was immediately drafted into the Army. He was in the U.S. Army Band and the President’s “Pershing’s Own” in Washington, D.C. for 8 years. In 1962 he accepted a teaching job at Sam Houston State University where he taught until 1997 as professor of music. He developed a History of Rock’ n Roll course that had hundreds of students waiting to enroll. He wrote a Rock’ n Roll text book for the course. In 1972 he finished a Doctor of Music Arts in performance and theory at the University of Michigan. Harley was music director for many years for SHSU summer music camps. He wrote the curriculum for the popular Music Therapy course at SHSU. In 1963 Jimmy Dean called Harley to ask him to direct a band for him when he entertained at the October Prison Rodeo in Huntsville. Jimmy and Harley had worked together in Washington and New York City. After the Sunday Rodeo, Dr. Beto, Director of Prison System for Texas, asked Harley to try to build bands on all the prison units. Harley eventually hired 10 band graduates from SHSU to teach at the various prison units and within a few years had 5000 inmates signed up for the music programs within the system. He worked at the Texas prison system for almost 20 years. Harley played saxophone with the Houston Symphony for 16 years and played in the Barnum & Bailey Circus in Houston for 9 years. In 1974, he and Marjorie organized the Huntsville Community Choral Society with members from many area churches and ethnicities. Such works as the Messiah, Amahl and the Night Visitors and 6 Gilbert & Sullivan operettas were performed. For 16 years Harley directed the Huntsville Senior Adult Community Choir. He was President of the Huntsville Habitat for Humanity for 10 years. The Rexes are long time promoters of the Arts. They have had season tickets since 1968 for the Houston Alley Theatre and since 1990 for the Houston Grand Opera performances. These were in addition to the many local concerts and plays they attend. Traveling has been one of their favorite activities. They have visited many countries in Europe and Asia. Harley is survived by his children, Dr. Donald Rex and wife Ruth Munoz, Dr. David and Dee Dee Rex and Cindy and Charles Carlow. He is also survived by his sisters, Patricia Rex and Helen Rex. He also leaves behind three grandchildren, Jaclyn Ladewski, Natalie and Harley Rex and three great grandchildren, Helen and Henry Ladewski and Olivia A. Rex. A service will be conducted at a later date in Huntsville. His wishes were for Marge and himself to be buried at Arlington National Cemetery. Those plans are currently being processed. Memorials in his memory can be made to the First United Methodist Church Building Fund, 1016 Sam Houston Ave., Huntsville, Texas, 77320 or the Harley and Marjorie Rex Endowed Scholarship at SHSU, P.O. Box 2537, Huntsville, Texas 77341. Memorial condolences to the family may be made at www.shmfh.com.

The family of Dr. Harley Edwin Rex created this Life Tributes page to make it easy to share your memories.

Send flowers to the Rex family.