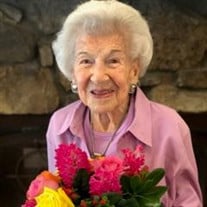 Geraldine Morton Tobler was born on May 4, 1921, to Susie Falls Morton and William Thomas Morton in Dumas, Arkansas, and died on April 23, 2021, just 11 days shy of her 100th birthday. She was the fifth of eight surviving children and loved growing up in Dumas in the midst of a loving family. Jerry graduated from Dumas High School and attended business college before joining the work force as a secretary at the Pine Bluff Arsenal (AR) and then the Veterans Administration during and following WWII. She met the dashing Charles Hamilton (Ham) Tobler and they married on January 13, 1946. Jerry and Ham lived in Ft. Smith, Little Rock and West Memphis, all in Arkansas, prior to settling in Huntsville, Texas in 1962, when Ham was hired at Sam Houston State University. Having continued her employment at an insurance agency and then as a church secretary, Jerry left paid employment when she and Ham adopted Steven Morton Tobler and Mark Hamilton Tobler. She was a loving and engaged mother, serving as the class mom many years, and cheering her boys on at numerous baseball and football games. Jerry was an active member of First United Methodist Church of Huntsville, including both the United Methodist Women and the Builders Sunday School Class, as well as volunteering in the church office. She was a member of SHSU Women and was active with the local AARP chapter. Jerry volunteered for over 40 years at Huntsville Memorial Hospital and was honored in 2004 as Volunteer of the Year, an award she more than deserved having accumulated over 11,000 volunteer hours. Following retirement, Jerry and Ham enjoyed traveling, playing bridge with friends, and bird watching. They were pillars in their community and freely shared their time and talents to assist and nurture friends and strangers alike. They were married 61 years until the time of Ham’s death in 2007. In 2010, Jerry moved to Carriage Inn retirement community (Huntsville) where she took full advantage of a wide array of activities. In 2015, she returned to Little Rock to be closer to surviving family. Jerry was preceded in death by her husband, Charles Hamilton Tobler; her sons, Steven Morton Tobler and Mark Hamilton Tobler; her parents, Susie Falls Morton and William Thomas Morton; and three sisters and four brothers, Sybil Morton Hefley, Roscoe Morton, Reba Morton, William Thomas Morton, Jean Morton Wiggins, Donald Morton, and Larry Morton. She is survived by eleven nieces and nephews, including a very special niece, Susan Hefley Weir. A graveside service will be held on May 5, 2021, at 10:00am at Brooke Cemetery, Huntsville, Texas. Memorials may be made to First United Methodist Church, 1016 Sam Houston Avenue, Huntsville, TX 77340 or huntsvillefumc.org/give or to First United Methodist Church, 723 Center Street, Little Rock, AR 72201 or fumclr.org/giving/. Those wishing to leave memorial condolences to the family may do so at www.shmfh.com.

Geraldine Morton Tobler was born on May 4, 1921, to Susie Falls Morton and William Thomas Morton in Dumas, Arkansas, and died on April 23, 2021, just 11 days shy of her 100th birthday. She was the fifth of eight surviving children and loved... View Obituary & Service Information

The family of Geraldine "Jerry" Tobler created this Life Tributes page to make it easy to share your memories.

Send flowers to the Tobler family.