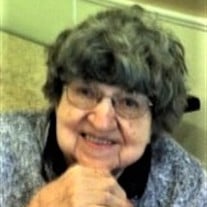 Geraldine Smith, 89, died peacefully on July 31st after a long battle with dementia. Geri (as she was known to her family and friends) was born in Duluth, Minnesota and grew up in Superior, Wisconsin. Although an only child, she grew up happily surrounded by lots of extended family including a doting grandmother, uncle, several aunts, and many cousins. A lover of music Geri grew up singing in church and the school chorus. After high school, Geri moved to Milwaukee where she hoped to find work and to begin college. It was while in northern Illinois she met and later married the love of her life, Donald L. Smith. They were blessed with two daughters and Geri took on the role of fulltime wife and mother. While primarily a homemaker, Geri periodically took on a part time job. It was while working as a nurse's aide that Geri discovered her love of caregiving and had she not been so dedicated to her family she would have become a nurse. Geri and Donald loved to travel and took extended family vacations around the country in their motor home. Sadly, Donald died ten months before what would have been their twenty fifth wedding anniversary. After Donald's death, and with her children grown, Geri went back to her love of caregiving and worked until her retirement as a nanny, a home health aide, and a hospice caregiver. One of Geri's great passions was baking, and everyone enjoyed her Christmas boxes of homemade candy and cookies. She also enjoyed reading, trivia, art/crafts, and keeping up with both local and national politics. Music and singing continued to give her joy throughout her life and Geri's quick wit and wicked sense of humor always kept family and friends in stitches. Geri is survived by two daughters, Susan Strzyzewski and husband John, Sheryl Jesswein and husband Kurt, and three grandchildren, Seth Strzyzewski, Iris Strzyzewski, and Victoria Jesswein, as well as numerous cousins, nieces, and nephews. The family would like to give a special thank you to all the dedicated staff at MRC Creekside Skilled Nursing Facility in Huntsville who did such an excellent job of caring for Miss Geraldine. A funeral mass celebrating Geri's life will be held on Friday, August 13, 2021 at St. Thomas the Apostle Catholic Church in Huntsville, TX at 11: 00 am. Memorial condolences to the family may be made at www.shmfh.com.

Geraldine Smith, 89, died peacefully on July 31st after a long battle with dementia. Geri (as she was known to her family and friends) was born in Duluth, Minnesota and grew up in Superior, Wisconsin. Although an only child, she grew up happily... View Obituary & Service Information

The family of Geri Smith created this Life Tributes page to make it easy to share your memories.

Geraldine Smith, 89, died peacefully on July 31st after a long...

Send flowers to the Smith family.