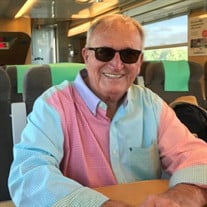 Gary Dean Grohs, 78 years old, passed away peacefully from Cancer on May 14th, 2021 at his home in Montgomery, Texas. He just slipped away to the hands of God in his favorite chair with his wife at his side. During his 78 years Journey there are so many stories it could fill a book. Gary was born on February 20, 1943 in Mitchell, South Dakota to Kathryn Louella Smith (Giblin) and Norbert Hubert Grohs. He grew up in Mitchell, South Dakota and attended Norte Dame High School (where the nuns probably had special prayers about him). He graduated from Mitchell High School on June 1st, 1962. He grew with many cousins that he still spent time with at every opportunity. Gary proudly served in the US Navy from August 29, 1962 and left with an honorable discharge September 29, 1966. After his service in the military he started his career as a painter and eventually got his Contractor’s license and painted many beautiful custom homes in the South Bay area of southern California. His customers loved him, recognized his truck and would walk down the street when they saw, it just to say “hi”. Many wondered how he could paint with a cup of coffee in one hand and a brush in the other. As he was ambidextrous, he could use both at the same time, he would tell them that. After he left the service, he would go back to Long Beach where the Navy still had a base. Then on February 3, 1968 he met the love of his life Birgitta Gitten Grohs. That August they got married in Las Vegas (it is a gamble) and Gary accepted and treated Birgitta’s young children, Pia and Perry, and loved them as his own. He also loved his two nieces and their families and they loved their uncle Gary. He enjoyed many activities with his family like dirt bike riding, skiing, waterskiing, traveling and of course, golf. As the kids grew up and went away to college, they continued traveling and bought a home in Sweden (Birgitta’s place of birth) in 1990. Both Pia and Perry got married and the grandchildren started to arrive. The first was born in July 1990 and the youngest in March of 2001. He truly loved being around all eight of them and even changed diapers on occasion. He was Farfar (father’s father) and Fifa instead of Morfar (mother’s father) to them and truly had so many blessed and happy memories with them. He and Birgitta loved their pets through the years. The last dog was Bentley, a rescue German Shepherd. He traveled with them 20 times across the Atlantic. As Bentley passed in 2019, he was cremated and placed on the bedroom dresser and he said good night to him every night. After he retired, both he and Birgitta started spending 4-5 months in Sweden. There he played a lot of golf and played in a tournament that lasted 5 days on different courses. He played in that tournament for 10 years until Covid. Five years ago they both decided to move to Texas and found a home in Montgomery. He loved where he ended up and could see nature’s finest every day. He fed the deer, ducks, geese and numerous birds. After hurricane Harvey hit in the Houston area and his home was left totally intact, he began volunteering for many things. He served coffee at the Veterans Clinic in Conroe. He so enjoyed talking to his fellow veterans. Gary was a life time member of the VFW and enjoyed participating in their activities. He also delivered Meals on Wheels several times a week. He was an associate member of LCARW, where he did a lot of Caring for America with Birgitta. He was also a volunteer at the Montgomery Women’s Center in various places. One of his favorite volunteer positions, was being a decoy at George Bush Int’l Airport with the TSA. There they are training the dogs to detect explosives, so you wear some explosives on you or in a bag for the dogs to find you. He got the biggest kick out of that. He was an avid campaigner for the local politicians. He worked the election on Election Day and really loved being involved in the community. Gary is preceded in death by his parents, Kathryn L. Smith and Norbert H Grohs. He is survived by his wife, Birgitta Grohs; daughter, Pia Andersson; son, Perry Andersson; his 2 nieces, Kelly Wilson and Kristy Loch and their families. His 8 grandchildren, Maranda Andersson, Logan Pierson, Tawny Meyers (Andersson), Palmer Pierson, Vitalia Pierson, Jantz Andersson, Paris Andersson and Tristen Andersson; and 1 great grandchild, Jolie Andersson Henning. He is also survived by sisters in law, Inger Swanson and Sharon Andrews; one brother, and several cousins and their families and numerous friends. Gary made many people laugh and made people feel good with his friendly smile on daily basis. For his family, he would and did do everything. His support for his wife in everything she did, was unparalleled and cannot be described in words. He never met a stranger and loved and lived life to the fullest. God just gained the funniest, brightest and greatest Angel and he will be surely missed by so many here on earth. A Memorial Service will be held on Saturday, June 5, 2021 at 11 AM at Walden Community Church in Montgomery, Texas. In lieu of flowers the family suggests donations be made to, #4709 VFW, 1303 W Semands Ave., Conroe, Texas 77301;American Cancer Society, www.cancer.org; or a charity of your choice.

Gary Dean Grohs, 78 years old, passed away peacefully from Cancer on May 14th, 2021 at his home in Montgomery, Texas. He just slipped away to the hands of God in his favorite chair with his wife at his side. During his 78 years Journey there... View Obituary & Service Information

The family of Gary Dean Grohs created this Life Tributes page to make it easy to share your memories.

Send flowers to the Grohs family.