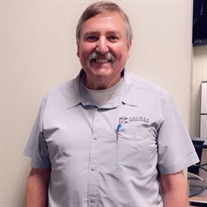 Gary Lee Bareham, 64, of Montgomery, TX passed away peacefully on May 21, 2021 after a hard-fought battle with cancer. He leaves behind his wife of 33 years, Teresa Bareham; their six children and 9 grandchildren. Gary was born on April 24, 1957 in Baltimore, MD to the late Norman and Elvera Bareham. He grew up in a loving family in Ellicott City, Maryland along with three little sisters; Donna, Lori and Diane. He graduated from Howard High School and attended Frederick Community College receiving a degree in Aviation. He was a jack of all trades. He started out as a ranch hand, airplane mechanic, masonry and construction worker. He also did sound jobs for local bands on the weekends. Gary married Teresa on August 1, 1987. They lived in Westminster, MD where they raised their six children; Christopher, Jessica, Erin, Danielle, Zachary and Kelly. Gary was a driven professional with an unmatched work ethic. His passion for the construction industry eventually lead him and his family to Montgomery, Texas in 2003. He loved spending time with family, friends and riding his Harley’s. When diagnosed with Cancer, he remained dedicated to his job and went as far as writing estimates in the hospital. He was brave and optimistic throughout his final weeks. Gary is survived by his wife, Teresa and six children; son Christopher, wife Heather and their four children (Hunter, Cara, Colton and Brea); daughter Jessica, husband Matthew and their two children (Kinley and Kaylie); daughter Erin, spouse Timothy and their three children (Pryce, Kamryn and Parker); daughter Danielle; son Zachary, partner Savannah; daughter Kelly, partner Dylan. As well as sister, Donna Phelan, husband Bill; sister Lori Umphres, husband PJ; sister Diane Boone, husband Richard; and numerous nieces and nephews. His wishes were to be cremated and have a big party in celebration of his life. The family will honor his wishes on July 10th, 2021 in Montgomery, Texas. The family wishes to thank everyone for their thoughts and prayers, they are truly appreciated.

Gary Lee Bareham, 64, of Montgomery, TX passed away peacefully on May 21, 2021 after a hard-fought battle with cancer. He leaves behind his wife of 33 years, Teresa Bareham; their six children and 9 grandchildren. Gary was born on April 24,... View Obituary & Service Information

The family of Gary Lee Bareham created this Life Tributes page to make it easy to share your memories.

Send flowers to the Bareham family.