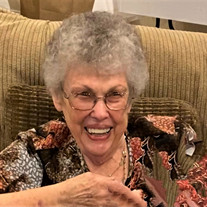 On Sunday, January 23rd, 2022, Frona Kathryn Massey, loving wife and mother passed away at the age of 82. Frona was born on February 7, 1939 to Frank (Fron) Paul and Lilly Kathryn Wilczak in Grafton, Ohio. She graduated from Midview High School in 1957 and served in the United States Navy from 1957-1962. She married Robert (Bob) Massey on January 6th, 1962 and raised three sons, Charles, David and Douglas. She retired from Sam Houston State University in 1995 after 18 years. Frona was passionate about her faith and family. She was a member of St. Thomas Catholic Church for over 45 years and cherished the lady's group and working the annual rummage sale. She also enjoyed needlepoint, ceramics and sewing. She was always quick to attend her grandchildren's events from cheer competitions, baseball games, band performances, swim meets, choir events and countless others. Frona was preceded in death by her parents, Frank and Kathyrn Wilczak, her husband Bob, and her son Charles. She is survived by her sons David and Douglas (Deborah), her sister Barbara and grandchildren Ashley (Kyle), Jonathan (Sarah), Lauren (David), Ryan, Patrick, Brenden and Reagan. She is also survived by one great granddaughter, Charley. Additionally, she is survived by two nieces, Denise and Kate and two nephews, Scott and Brian. Memorial services will be held at Sam Houston Memorial Funeral Home, 1700 Normal Park, Huntsville, TX 77340 on Thursday, January 27th at 5pm with a rosary at 6:45 pm. The Funeral is to be held on Friday January 28th at St. Thomas the Apostle Catholic Church, 1323 16th Street Huntsville, TX 77340 at 10:30 am. A reception will be held in her honor at St. Thomas following the mass. The Burial will be for family at the Houston National Cemetery at a later time. Should friends or family desire, as an expression of sympathy in lieu of flowers, donations can be made to St. Thomas Catholic Church Building Fund in memory of Frona Massey. Memorial condolences to the family may be made at www.shmfh.com.

On Sunday, January 23rd, 2022, Frona Kathryn Massey, loving wife and mother passed away at the age of 82. Frona was born on February 7, 1939 to Frank (Fron) Paul and Lilly Kathryn Wilczak in Grafton, Ohio. She graduated from Midview High School... View Obituary & Service Information

The family of Frona Kathryn Massey created this Life Tributes page to make it easy to share your memories.