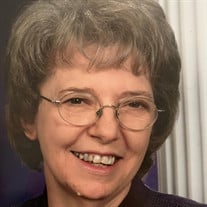 Florace "Flo" Marie Howard Murphy departed this life on Wednesday, April 28, 2021. She was 90 years of age. She was born in Young County, Texas on Sept. 8, 1930, the third daughter of Ollie and Martin Howard. She was an exceptional student, and upon graduating early from Newcastle High School, she moved to Lubbock to attend Arlene's College of Cosmetology. She met and married Olan Everett Murphy on May 14, 1949. She was 18 years old. Flo spent the majority of her adult life as a hairdresser. While she worked in many salons, over time she would own 2 salons, the final one being Highland Place Beauty Salon. For over 20 years she worked at Highland Place, making it a fun and uplifting salon for her patrons. It was from there she would retire early in the 2000's. Flo and her husband, Olan were long time residents of Lubbock County. They were active members of the community of Roosevelt, he as a member of the volunteer fire department and she as a volunteer for the Panhandle-South Plains Fair, and an active member of First Baptist Church of Idalou, Texas. She took up the art of oil painting, and provided her family with many beautiful works of art. Flo and Olan were married for 59 years until his death in 2008. In 2015, Flo moved to Montgomery to be close to family. She joined First Church, Montgomery, where she was an active and faithful member. She had been a member of the Seth Hurin Bates Chapter of the Daughters of the Republic of Texas. Flo is survived by her daughters, Janiece Mitchell and Beth Hand, both of Montgomery; four grandchildren: Tara Williams and husband Stephen of Sugar Land, David Gray of Ft. Worth; Tabetha Varner and husband Sean Coombs of Ft. Collins, CO, and Alana Hamilton of Montgomery. Flo has 8 great grandchildren: Aidan Burkholder, Kaelyn Gray, Alex, Destiny and Mia Hamilton; Katie, Timmy and Alyssa Varner. She also has one great great grandson, Kason Varner. Surviving family members also include brother-in-law, Derrell Murphy, two sisters-in-law, Polly Murphy and Gloria Mullins, along with countless nieces, nephews and friends. She was preceded in death by her husband Olan, parents Ollie and Martin Howard, a sister Avalene Corley, as well as two sons-in-law, Mark Hand and David Mitchell. Memorial Services will be held Friday May 7th at 11:00 am at First Baptist Church Montgomery, 20423 Eva Street. Her remains are in the care of Sam Houston Memorial Funeral Home. Her cremains will be laid to rest alongside her husband and family in the City of Lubbock Cemetery in Lubbock, Texas.

Florace "Flo" Marie Howard Murphy departed this life on Wednesday, April 28, 2021. She was 90 years of age. She was born in Young County, Texas on Sept. 8, 1930, the third daughter of Ollie and Martin Howard. She was an exceptional student,... View Obituary & Service Information

The family of Florace "Flo" Marie Murphy created this Life Tributes page to make it easy to share your memories.

Send flowers to the Murphy family.