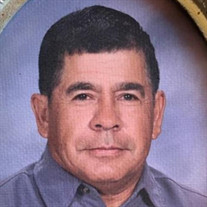 On Saturday, December 12, 2020, Esteban “Steve” Aguayo, loving husband, father, and grandfather, passed away at the age of 71. Steve was born on November 28, 1949 in San Diego, Texas to Cruz and Rafaela (Perez) Aguayo. After high school, he ventured to Huntsville to attend Sam Houston State University where he met the love of his life, Belia Muñoz. They married while they were both students at SHSU on December 18, 1971 and he went on to graduate in May 1973. They raised two daughters, Marisela (Mari) and Isabel, and one son, Michael. Steve was a teacher/coach for many years, starting his career in education in Coldspring ISD. Then going on to teach in Huntsville ISD, Trinity ISD, and Richards ISD. During his years of teaching, he would work summers by umpiring the Huntsville adult league softball games. Steve retired from education in 2008 to work on his ranch with his cows. Steve was an active and devout member of St. Thomas Catholic Church. For many Christmases, Steve organized a toy and food drive through the church, for the less fortunate. He always had a giving heart and when he came across a good deal, he would stock up and share with family and friends he came across. Steve was a true fan of the Dallas Cowboys, even when they were on a losing streak. The thing that brought him the most joy was his grandchildren. He would do absolutely anything for them and loved being around them. Steve was preceded in death by his father and mother; his older brother Francisco Aguayo; his infant children; and other precious family members. He is survived by Belia, his wife of 49 years; son, Michael (Thresa)Aguayo; daughters, Marisela (Miguel)Pineda & Isabel (Daniel)Kirwin; grandchildren, Brenda, Eric, Kinsley, and Adelyn. A visitation will be held on Friday, December 18, 2020 from 5:00 – 8:00pm at Sam Houston Memorial Funeral Home in Huntsville, TX. A catholic mass will be on Saturday morning at 10:30am at St. Thomas Catholic Church in Huntsville, TX. Interment will follow at Mayes Addition of Oakwood Cemetery. Memorial condolences to the family may be made to www.shmfh.com.

The family of Esteban "Steve" Aguayo created this Life Tributes page to make it easy to share your memories.

Send flowers to the Aguayo family.