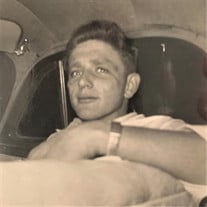 Enoch Arlen Flournoy was a caring husband, daddy, Pa, Pop, brother, and friend. Enoch passed away on December 17, 2020 at the age of 85, at his longtime home in Katy, Texas. His recent battle with kidney cancer showed his courage in facing life challenges with strength and decorum. Despite the pain, Enoch stayed strong until the end. He was born to Charlie and Davilla on May 29, 1935. Enoch met the love of his life, Johnnie Mae, and they were married on May 20, 1955. They were married 59 years before Johnnie’s passing in 2015. When Enoch was a young boy, he loved to go to work with his father and loved to tell stories of these adventures on the penal farm. He would literally beg to go to work with him and be the guinea pig for the tracker dogs that Daddy Charlie trained. Daddy Charlie told him not to “fiddle fart around and get up that tree” before the dogs could catch him. Many times, he was only a few steps ahead and barely escaped the hound dogs at his heels. He always looked forward to visiting trustees on the penal farm. His favorite trustee invited him one morning for homemade donuts. Enoch said it was the best donut he had ever had. That’s because it was the first and only donut he’d ever had! When he was a teenager, he was often asked by his mother to chaperone Arliece’s dates. Little did she know, Arliece would drop him off at the town square and be on their way. He would always report back that Arliece was on her best behavior 😉 😉 😉 He enjoyed all sports – playing and watching – but was an avid basketball player in high school. He was a star player and was offered a scholarship to Blinn College. His high school team voted for captain his senior year and the vote was unanimous except for one – his own vote for one of his teammates. Enoch was the kind of uncle who loved to tease and pick on his nieces and nephews. Anything from cutting their tongue out or ears off to spanking or chasing them. Uncle Enoch was a favorite to many. And we mean many since he was one of 11 children. He loved to hunt and fish, taking his annual trip to the deer lease in Mason or Llano and fishing the Trinity River. Many stories from these trips are legendary and are not to be shared publicly, but if you could locate any of the attendees, they may be willing to share some of those secrets. Enoch and Jonnie Mae met at a church volleyball game during his senior year of high school and blew off his scholarship to Blinn to continue courting the hottest babe in Madisonville. They married in her mother’s living room the night graduated from high school and shortly relocated to Houston. Enoch was a loving, but firm father. He instilled the importance of family in his three kids and they have done the same with their kids. It’s common in the Flournoy family to consider your cousins among your best friends. The family joke was that no one could leave the reunion before Uncle Enoch left. One year, someone managed to beat him to the punch, and no one ever let her live it down. After raising their children, Enoch and Johnnie Mae looked forward to being grandparents. When Brandon was born, Pa found his littlest hunting buddy and when Shane came along, he had a grandson he could really goof around with. He was an extremely proud Pa when all three of his granddaughters, Kelley, Christa and Brittany, graduated college. He always made sure to tell them to “BE MEAN!” when they would leave Booma and Pa’s house. We all loved Uncle Enoch and will remember him fondly and with laughs. I hope he and Johnnie Mae are watching Judge Judy and taking country drives. Enoch was a man of few words, but when he loved you, you knew. He is survived by his three children: Vickie Lovato, Debbie Killgore, and Stanley Flournoy (Wendy Rumley); his grandchildren: Kristi Nash, Brandon (Sam) Lovato, Kelley (Neal) Batson, Brittany (Brandon) Greer, Shane Flournoy, Christa Killgore, and Samantha Rumley; 11 great-grandchildren; 2 sisters: Zelda Blaylock and Glynda McDaniel; and 2 sister-in-laws Ruthie Ann (Leon) and LaNita Slaughter. A graveside service is scheduled for 2pm on Monday, December 21, 2020 at Adickes Addition of Oakwood Cemetery in Huntsville, TX. Memorial condolences to the family may be made to www.shmfh.com.

Enoch Arlen Flournoy was a caring husband, daddy, Pa, Pop, brother, and friend. Enoch passed away on December 17, 2020 at the age of 85, at his longtime home in Katy, Texas. His recent battle with kidney cancer showed his courage in facing life... View Obituary & Service Information

The family of Enoch Arlen Flournoy created this Life Tributes page to make it easy to share your memories.

Send flowers to the Flournoy family.