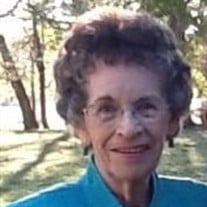 Dorothy Thurlene (Lahr) Clark, 89, of Montgomery, Texas, formerly of Woodward, Oklahoma, went peacefully into the arms of our Heavenly Father on the morning of June 1, 2021. Visitation will be held Tuesday, June 8, from 5:00pm to 7:00pm at Sam Houston Memorial Funeral Home in Huntsville, Texas. Funeral services will be held Friday, June 11, at 10:00am in Clayton Hall at First Christian Church in Woodward, Oklahoma, followed by internment at Elmwood Cemetery. Dorothy was born in Woodward to Fred Jacob and Ruby Rebecca (South) Lahr on July 23, 1931, the youngest of their four children. Her father passed away not long after she turned two, but his family was still very much a part of her life and she spent a lot of time on their farm while growing up. Though Dorothy was raised during the Great Depression with a young widow as head of the family and sole breadwinner, she liked to say she never knew she was poor. She had a wonderful childhood and an excellent role model in her hard-working, no-nonsense, tender-hearted mother. Further strengthening her character and turning her into an avid weather watcher, Dorothy survived the catastrophic Woodward tornado of April 9, 1947. Not long afterwards, Dorothy became smitten with the charming Alvin Ernest Clark, a tall, curly-headed childhood friend of one of her older brothers, Keith. After graduating from Woodward High School, Dorothy turned her attention to marriage and she and Al wed at First Christian Church of Woodward on September 4, 1949. While Al finished his Civil Engineering degree at Oklahoma A&M in Stillwater, Dorothy worked in the college library to support them. After safely returning from serving his country with the Army Corps of Engineers in the Korean War, God gave them four stairstep children: Lesta Christine (Christy), Kay Ellen, Carolyn Yvonne and Neil Alvin. Al's career with Humble Oil / Exxon took them across the western half of the United States over the next 34 years. Though Dorothy dreaded hearing the news of each impending move, she dutifully relocated her family and quickly got them settled in their new locale. She may not have realized it, but with her mother's heart, home was wherever she was. Dorothy was a classic beauty, inside and out, with a dazzling smile, infectious laughter and generous spirit. She picked up on a person's interests or unique qualities and would often bring them up in a way to make that person feel like the two of them had a little secret or connection...it was something different and special with everyone. She had a quick wit and perpetual twinkle in her eye. She did needle crafts most of her life and was an excellent seamstress (there are a lot of Dorothy Clark creations still floating around out there). Books and puzzles were no match for Dorothy as she tore through them voraciously. Her family will cherish the letters she wrote to them over the years and the journals she kept while living with Al when he was transferred to Korea. And let's not forget her green thumb (and our burned thumbs she doctored with her aloe plant) and her love of fishing (she could hook and reel them in with the best of 'em). She loved all her pets from childhood on, but none was more beloved than her little Sugar dog, a dappled not-quite-miniature dachshund that never left her side (except if someone was cooking in the kitchen). Above all, Dorothy loved the Lord and served Him faithfully all her life. Though we are heartbroken and life feels empty without her, we are at peace and praise Jesus knowing she is in Heaven, completely healed, meeting up with all those who've gone before her that she longed to see again. Her legacy and our memories go far beyond the confines of these few paragraphs. She was a devoted and cherished daughter, sister, wife, mother, mother-in-law, grandma, great-grandma, aunt, cousin, friend, neighbor and parishioner. We are so grateful to have had her in our lives, and she will be greatly missed by everyone she loved. Dorothy was preceded in death by her husband of 54 years, Al, parents Fred and Ruby, brothers Quintin (Bert) and Keith, sister Doris Sternitzke, and grandsons Ted Elliott and Chandler Clark. Dorothy is survived by daughters Christy Clark (Dave) of Montgomery, Texas, Kay Pentecost (Ron) of Lenexa, Kansas, and Carolyn Wood (Matt) of Alpharetta, Georgia; son Neil Clark (Sheridan) of Edmond, Oklahoma; granddaughters Ellen Harrison, husband Casey and children Chase and Emily of San Marcos, Texas, and Beth Knighton, husband Jeremy and children Sophia and Isabella of Edge, Texas; sister-in-law Delores Lahr Painter of Woodward, Oklahoma; and numerous beloved nephews, nieces, and close friends. Memorial donations may be made in Dorothy's name to First Christian Church, 1316 9th Street, Woodward, Oklahoma 73801. Condolences to family my be made at www.shmfh.com

Dorothy Thurlene (Lahr) Clark, 89, of Montgomery, Texas, formerly of Woodward, Oklahoma, went peacefully into the arms of our Heavenly Father on the morning of June 1, 2021. Visitation will be held Tuesday, June 8, from 5:00pm to 7:00pm at Sam... View Obituary & Service Information

The family of Dorothy Thurlene Lahr Clark created this Life Tributes page to make it easy to share your memories.