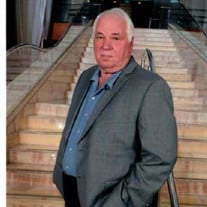 Don Thomas “Coach” Murray, a remarkable and loving man, passed away in the early morning of August 2, 2021, after a battle with COVID. Born September 12, 1944, to Walter Lee and Lela Murray, Don spent his entire childhood in Jacksonville, Texas. Don attended Jacksonville High School where he starred for the football team before graduating in 1963. Don’s performance as a center for the Jacksonville football team earned him a full football scholarship to Sam Houston State University. At Sam Houston State University, Don continued to enjoy success on the football field wearing #57 and starring at center and middle linebacker. Don was a proud member of Sam Houston’s 1964 squad that won the Lone Star Conference championship and tied 7-7 with Concordia College in the NAIA National Championship game. Don also served as a resident assistant and assistant coach at Sam Houston and earned a Bachelor of Science in Physical Education and a Master of Education in Physical Education. He began his coaching and high school teaching career in Beaumont, Texas, before moving to Groveton Independent School District He ended his teaching and coaching career in Bastrop, Texas where he was head coach and taught American History before retiring in 2001. After retirement, he served as a substitute teacher at Montgomery High School in Montgomery, Texas. At each of his career stops, he was loved by his students and faculty. Due to his natural humility, Don never talked much about his accomplishments as a football player, a coach and teacher of thirty-five years, or as an exceptional person. Those accomplishments included being a great dad, fostering children, adopting a child, influencing countless students and student-athletes, and always standing ready to help out a friend or a stranger. He did enjoy talking about how much he loved his family, his friends, his home, his ukulele and guitar, his music, old movies, books, history, and life in general. He talked about places he had gone, places he wanted to go, and how fortunate he was to have so many people who loved him. People were naturally drawn to Don’s charismatic personality. He loved people, and they loved him. Seemingly before people were even introduced to him, he was automatically called "coach." Don was a loving husband, dad, stepdad, and pawpaw and a friend to everyone no matter what wrongs they may have done in life, no matter if they were rich, poor, or where they came from. He made a lasting impression on everyone who were so fortunate to meet him. His love was unconditional. Don was preceded in death by an infant son, Guy Edmund Murray, his parents, sister Patricia, and an infant brother. Those left grieving are his wife of twenty-five years Diane Murray, son Matt Murray and wife Kelsey, grandsons Dane, Hudson, and Lincoln; Son Darren Murray, wife Brandi, granddaughter De’arra, (step-grandchildren Isaiah, Jaylee, Jaya); His daughter Jill Castro, husband Audrey and grandson Dalton; Stepchildren – Michelina Fedele Cullivan, husband Thomas, grandchildren Zeke, Augustus, Silas, and Cillian; Mario Fedele and wife Jennifer, grandchildren Avery, Autumn, Brianna, and Levi (step daughter Tori); Stepson Shawn Fedele, granddaughter Hailee; Daughter in law, Casey Coday and Josh; grandchildren Avery Fedele, Cooper, and Addie Coday; Step daughter Deena Catron and family; Brothers, David Murray (Lila Jean), Jimmy (Gwen) Murray; Sisters, Anne Green and Billye McGowan Also numerous nieces and nephews, and too many friends, neighbors and family to mention all. A musical celebration of his life will be announced at a later date. ______________________________________________________ When Great Trees Fall By Maya Angelou When great trees fall, rocks on distant hills shudder, lions hunker down in tall grasses, and even elephants lumber after safety. When great trees fall in forests, small things recoil into silence, their senses eroded beyond fear. When great souls die, the air around us becomes light, rare, sterile. We breathe, briefly. Our eyes, briefly, see with a hurtful clarity. Our memory, suddenly sharpened, examines, gnaws on kind words unsaid, promised walks never taken. Great souls die and our reality, bound to them, takes leave of us. Our souls, dependent upon their nurture, now shrink, wizened. Our minds, formed and informed by their radiance, fall away. We are not so much maddened as reduced to the unutterable ignorance of dark, cold caves. And when great souls die, after a period, peace blooms slowly and always irregularly. Spaces fill with a kind of soothing electric vibration. Our senses, restored, never to be the same, whisper to us. They existed. They existed. We can be. Be and be better. For they existed. Watch Over Us – We Love You Your Family

Don Thomas &#8220;Coach&#8221; Murray, a remarkable and loving man, passed away in the early morning of August 2, 2021, after a battle with COVID. Born September 12, 1944, to Walter Lee and Lela Murray, Don spent his entire childhood in Jacksonville,... View Obituary & Service Information

The family of Don Thomas Murray created this Life Tributes page to make it easy to share your memories.

Send flowers to the Murray family.