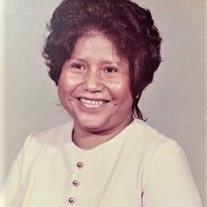 Dominga Libertad Suarez was born December 20, 1928 to Gaspar Suarez and Dolores Tomala in Santa Elena, Ecuador. She left peacefully to be with our Heavenly Father on May 8, 2021 in Sugarland, TX at the age of 92. In 1969 she came into the United States with her 11-year-old daughter Maria, where she began her new life in Macomb, Illinois until 1974. They later relocated to Huntsville, TX where she lived for the majority of her life. Her two sons Julian and Leo, with their wives and children, later joined her in the United States from Ecuador where they all began their lives together as a family with her grandchildren. She worked at Monterey Mushrooms in Madisonville,TX up until her retirement where she spent her remaining life being cared for and loved by her daughter in Richmond, TX until her passing. Dominga Suarez was a strong woman who came to this country for a better future for her family. She loved to travel and meet new people. She will be greatly missed by many as she was full of joy and loved to dance. Dominga's legacy will live through her family whom will remember her always with her radiant smile and cheerful heart. Dominga is survived by her daughter Maria Wesner and husband Tommy of Richmond, Leonardo Borbor and wife Rosa of Huntsville and daughter-in-law Alba Borbor of Huntsville. She is also survived by her grandchildren Heather Vargas and husband Chris, Vanessa Wesner, Benjamin Wesner, Kathy Dezelle and husband Leroy, Patricia O'Brien and husband Daniel, Veronica Juarez and husband Daniel, Leonardo Borbor Jr, Pamela Borbor, Vivian Young and husband Scott, Flor Borbor, Julio Borbor and wife Diana, Joel Borbor and wife Byanka, Jeannie Borbor, Julio Borbor and Marjorie Borbor and numerous great grandchildren. She is preceded in death by her father Gaspar Suarez, mother Dolores Tomala, grandson Julian Borbor Jr. and her son Julian Borbor Sr. The family will receive friends on Thursday, May 13, 2021 at the Sam Houston Memorial Funeral Home in Huntsville, TX from 5:00pm to 7:00 pm with a Rosary service beginning at 7pm. She will be laid to rest on Friday, May 14, 2021 with the services being held at 10:30 am at the St. Thomas the Apostle Catholic Church in Huntsville, TX. MASKS ARE REQUIRED AT THE CHURCH. Burial will follow at the Mayes Addition of Oakwood Cemetery on Martin Luther King Dr. Memorial condolences to the family may be made at www.shmfh.com. https://www.tributeslides.com/tributes/show/GBW44KY25JHC384H

Dominga Libertad Suarez was born December 20, 1928 to Gaspar Suarez and Dolores Tomala in Santa Elena, Ecuador. She left peacefully to be with our Heavenly Father on May 8, 2021 in Sugarland, TX at the age of 92. In 1969 she came into the United... View Obituary & Service Information

The family of Dominga Libertad Suarez created this Life Tributes page to make it easy to share your memories.

Send flowers to the Suarez family.