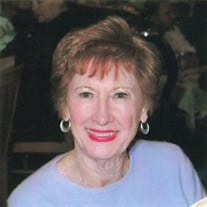 Delores Pearl Whitworth Melbourne passed away peacefully surrounded by her loving and devoted daughter, Susan Hake, on Wednesday evening, July 28th, 2021. Visitation and Funeral Services will be held, Saturday, July 31st at Sam Houston Memorial Funeral Home located at 10129 FM 1097 W. Willis Texas, 77318. Visitation will be from 10:00AM to 11:00AM with the service starting at 11:00AM. Burial will be immediately following service at Smith Memorial Park. Delores was born the 4th of 5 children of Roscoe and Fern Whitworth of Coffeyville, Kansas on November 11th, 1932. Her favorite memories growing up in Coffeyville were cheering on her 3 older brothers, Rocky, Clarence, and Dick Whitworth who all played football and baseball for the Tornados of Field Kindley High School. Delores graduated from Carleton College in Northfield Minnesota with a Business Degree in 1954. She and her family by that time had moved to Minneapolis, Minnesota where her father had become a Vice President for Purina Mills. Delores became active in politics and campaigned as a Young Republican for President Dwight D Eisenhower's re-election campaign in 1956. It was at a Young Republican's meeting where she met her future husband, Hobe Melbourne, and they married at Hennepin Ave. Methodist Church on January 19, 1957. Hobe & Delores welcomed their son David in 1958, and had their daughter Susan, while living in Kansas City in 1960. In January 1963, they moved to Houston with homes in Westbury and Sharpstown. During the mid 60's, Delores learned to how to paint. She also went back to work part time @ Wicks & Sticks in Westbury Square. It was through Wicks and Sticks where Delores made her lifelong friends and got into the Antique business travelling all over Texas and buying and selling antiques. In the mid 70's Delores decided to re-enter the work force work full time. She loved her jobs working as a secretary for Wilhelm Leyendecker, and as an administrator for Houston Metro Transit Authority, but her favorite job was working HR for Fluor Daniels in Sugar Land. *Delores retired from Fluor in 2003, and she and Hobe decided they wanted to be closer to their grandchildren, and they moved up to Bentwater in 2004. Delores always dreamed of a house out in the country, and her son-in-law Steve made Delores's dream come true. As fate would have it, Steve built Delores and Hobe a home located on Melbourne Ct. Delores joined Montgomery Methodist Church where she spent time volunteering in the church office, as well as helping out the Clothes Closet and the Stephen Ministry. Delores stayed busy gardening, faithfully watching the Houston Astros, but her greatest joy in life were her family, watching her her grandchildren grow up, and spending more time with her friends. Delores is survived by her sister Shirley, her brother-in-law, Paul, her brother Richard, son, David, daughter-in-law Elizabeth, and grandson Will, daughter Susan, son-in-law Steve, and granddaughters Katelyn, Jennifer and Brandee. Delores is preceded in death by her parents Fern and Roscoe, husband Hobe, her grandson Ryan Taylor Hake, brother Rocky, sister-in-law Monta-Ruth, brother Clarence & sister-in-law Muriel, and sister-in-law Maynette Whitworth. In lieu of flowers, please consider making a donation to the Alzheimer’s Association. http://www.alz.org You are invited to leave a written condolence on our website at www.shmfh.com.

The family of Delores Pearl Melbourne created this Life Tributes page to make it easy to share your memories.

Send flowers to the Melbourne family.