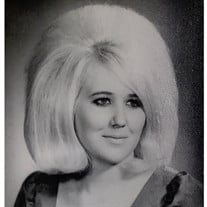 Debra "Debbie" Lois Bonham left this world to be an angel watching over us on January 23, 2022, at her home in Huntsville, Texas. Debbie was born on April 8, 1952, in Conroe, Texas to Fannie Lou Ward and Otis Ward. She grew up in Cleveland, Texas, a bright blond little girl, with her beloved mother and older sister. As a young woman and adult, the most important thing in her life would be raising her children and being a mama, mother, mom, or mommy to Heddi, Shante, Lacey and Jordan. These are the many names that her children lovingly called her. There was never anything that made her more happy or proud as her three girls and son; she showered them with love as they were her life, and she was theirs. Debbie was a true Houston sports fan. One of her favorite pastimes was watching the Rockets and Astros as she had with her mother and made sure she never missed watching a game no matter how good, or bad, the team was at the time; she was a true fan to the very end. Holidays were some of the most important and special days for Debbie as they were for her as a little girl. From Halloween, a favorite of hers from when she won a Halloween pageant as a girl, to pastel Easter bunnies, an abundance of Christmas decorations, and the most special birthdays, she rejoiced in being able to spread happiness to those around her to recreate for others the magic and wonder she felt for these very special days. There are no words to express the profound hole in their hearts at her loss. There was never a more loving and kind soul to those that had the honor to know her and now remember her. The family is holding a private service. Debbie is survived by daughters: Heddi Bonham and boyfriend Jason Welch, Lacey Bonham, Shante Bonham, and son Jordan Bonham all from Huntsville, Texas. She is preceded in death by mother Fannie Lou Ward, and sister Alice Smith. Memorial condolences may be made to the family at www.shmfh.com.

Debra "Debbie" Lois Bonham left this world to be an angel watching over us on January 23, 2022, at her home in Huntsville, Texas. Debbie was born on April 8, 1952, in Conroe, Texas to Fannie Lou Ward and Otis Ward. She grew up in Cleveland,... View Obituary & Service Information

The family of Debra "Debbie" Lois Bonham created this Life Tributes page to make it easy to share your memories.

Debra &quot;Debbie&quot; Lois Bonham left this world to be an angel watching...

Send flowers to the Bonham family.