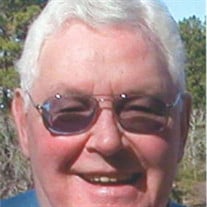 Dean Miller Staley, age 83 was born June 23, 1937 in New Castle, PA., to Dean M. Staley and Jean Aiken Staley. Graduated from New Castle Senior High School in 1955. He served in the U. S. Air Force for 8 years. After serving in the Air Force, he attended Iowa Tech and obtained an Associates Degree in Computer Electronics. Joined Honeywell, Inc., in 1965 and was transferred to Houston, Texas in 1966. He later became the Manager of Administration for Honeywell Information Systems in Houston. Married Judy McKinney in 1973 in Houston and lived in the Cypress, Texas area for 27 years. He was a former member of the Cypress United Methodist Church. They both retired and moved to Montgomery, Texas in 2000, and was a member of the Montgomery United Methodist Church. While trying to retire, he became the President of Keenan Water Supply Company where he served for many years. He enjoyed RVing and traveling. Preceded in death by his parents, and a brother, John A. Staley of Clearwater, Florida. Survived by his loving wife of 48 years, Judy, and his children from a previous marriage, daughter, Dawn M. Brouillard, son, Scott L. Staley and wife, Glyndona, three grandchildren, Cody Brouillard, Alison Staley and Kenneth Staley. A memorial service will be held on Friday, July 2nd at 10 a.m. at the Montgomery United Methodist Church, 22548 Highway 105 West, Montgomery 77356. Donations may be made to a charity of your choice, to the Montgomery UMC Church (P. O. Box 1330, Montgomery 77356) or to the Chapel of the Lake, 21047 Chapel Drive, Montgomery 77316. You may leave written condolences at www.shmfh.com

The family of Dean Miller Staley created this Life Tributes page to make it easy to share your memories.

Send flowers to the Staley family.