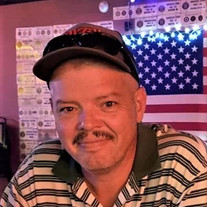 Danny Glen Washington Jr. departed this world to be with our Heavenly Father on October 25th, 2021. He was 47 years of age and resided in Huntsville, Texas. Glen (as he was fondly called by family and friends), was born in Oceanside, California to Danny Glen Washington Sr. and Wendy Isaacks on September 11th, 1974. He grew up in Pasadena, Texas and received his GED in 1991. He proudly served in the US Navy for two years before becoming a correctional officer for the Texas Department of Criminal Justice (TDCJ). He served the great state of Texas for 23 years as a TDCJ Correctional Officer, Sergeant, and Lieutenant until his unexpected passing last Monday. Glen found the love of his life Geri Ann Boudreau (Rozema) after many years of searching. They were married March 16th, 2015 at the American Legion Post 95 in Huntsville, Texas where they sang karaoke most Friday nights. Glen would often be found with his beloved wife hunting deer from their deer stand or fishing from their boat when they weren't at home watching The Voice together. Glen also shared wonderful times with his friends playing poker and was an active member at the American Legion in Huntsville, Texas and the VFW (Veterans of Foreign Wars) in Trinity, Texas. Today he sits in Heaven with his grandparents Joan Rye, Jerry Isaacks, Margie (Creamer) Washington, Rudolph Washington, and infant brother Kenny Collins. His love and memories will remain in the hearts of his wife Geri Washington (Rozema); parents Wendy Isaacks, Danny & Delores (Shaw) Washington; children and spouses Kaylee Boudreau & Daniel (Danny) Phillips, Bethany Evans, Lacilyn (Washington) & Bryndan Walsh, and Cole Boudreau; his grandchildren Adam & Nirvana Boudreau, and Aedrian Walsh, his siblings and spouses David Washington & Jennifer (Ragan) Washington, Becky (Freeman) & Scott Benham, Ashley (Washington) & CJ Babb, Scott & June Purswell, Ramona & Scott Keel, Wendy Daigle; various nieces and nephews; and dear friends Doug Williamson and Robert Jennings among others. A celebration of life will be held at the VFW post 6899 in Trinity on Sunday, October 31st, 1pm, at 300 West Caroline Street, Trinity, TX 75862. In Lieu of flowers, the family asks that you make a donation to the American Diabetes Association as this was an ongoing battle for Glen. Memorial condolences may be made to the family at www.shmfh.com.

Danny Glen Washington Jr. departed this world to be with our Heavenly Father on October 25th, 2021. He was 47 years of age and resided in Huntsville, Texas. Glen (as he was fondly called by family and friends), was born in Oceanside, California... View Obituary & Service Information

The family of Danny Glen Washington, Jr. created this Life Tributes page to make it easy to share your memories.

Danny Glen Washington Jr. departed this world to be with our...

Send flowers to the Washington family.