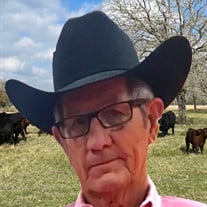 Dale Lee Holly went to be with the Lord on Friday, December 24, 2021 at his home in Muldoon. Dale was born on August 10, 1946 in Houston, Texas, the son of the late E.A. Holly and Syble (Gunkel) Holly. His childhood years were spent in Riverside, Texas with the family eventually moving to the farm in Huntsville. All of those years were spent with his dad learning to fix, build and engineer numerous projects that led him to be a "Mr. Fix It" of all things. He used all that he learned in his life and was one of the handiest, most reliable, first call, give the shirt off his back friends you would ever meet. Dale attended grade school, and graduated from the 8th grade in Riverside, TX. He then went on to finish high school in Huntsville where he graduated in 1964. After high school, he went to work for TDC as a High Rider in the late 1960's. In order to pursue his college degree, he left TDC and became a driller for E.A. Holly Water Well Service working alongside his dad. After a few years he was hired by Milchem, a subsidiary of Baker Hughes in 1975 to be the plant manager in Battle Mountain, Nevada. In 1978, Milchem transferred him to build and be the plant manager in Galveston, Texas. In 1979, Milchem placed him in charge of building their plant in Indonesia. A few years later in 1981, he was transferred to Houston, Texas to run the plant division for Milchem. Dale left Milchem in 1984 to own and operate his own business, H.M.I. Holly Mining Industries. He sold this business in 1991 to become a full- time rancher in Huntsville. Dale married Patti Kay Seale on March 9, 1996 in Huntsville, Texas. Their love of ranching began in Huntsville and later moved their cattle operation to Muldoon to become the 4th generation of ranchers on family land. In the union of their marriage, and their love for cattle they created a ranch companionship of 25 years known as the Arrow H Ranch. Papa is what the grandkids called him and what a papa he was. He enjoyed attending all of their sporting events including baseball, volleyball, and rodeo. Dale was an animal lover for sure, he loved his dogs: Trapper, Chico, Little Bit, Chisum, his horses and his all- time love for his cattle. He loved being outdoors feeding, fixing or building something all the time. Papa was witty and never ever met a stranger. He loved agitating his grandkids, in the most loving way possible and you rarely found him without a smile on his face or his tongue sticking out. He is survived by his wife, Patti Kay Holly; two sons: Mark Holly and wife, JoAnne, of Huntsville, TX; and Matt Crainer and wife, Jassy, of Carrizo Springs, TX; five grandchildren: Tanner Holly and fiancé, Ashley, Taylor Holly, Trevor, Avery and Tuff Crainer; three sisters: Jeanie Cochran and husband, Dan of Waco, TX; Joyce Currie of Trinity, TX; and Leighnae Poole of Rayville, LA; along with numerous nieces and nephews and many dear friends. Dale was preceded in death by his parents: E.A. and Syble Holly; and two brothers-in-law: Archie Currie and Glynn Poole. A visitation will be held at Koenig-Belvill Funeral Home & Cremations in La Grange on Tuesday, December 28, 2021 from 12:00 to 6:00 p.m. The family will receive friends from 4:00 to 6:00 p.m. Graveside services for family and friends will be held at Pitman Cemetery in Muldoon, Texas on Wednesday December 29, 2021 at 10:00 a.m. Honorary Pallbearers are: Maurice Estlinbaum, Connie Cline, Andy Walker, Robert Walsh, Tanner Holly, Trevor Crainer A second visitation and memorial service and will be held at North Side Baptist Church, 1207 FM 980, Huntsville, TX on Thursday December 30, 2021 at 10:00 a.m. Dale spent many years and countless hours loving and caring for Patti's parents, Billy and Charlene during their long battle with Alzheimer's. In lieu of flowers, the family requests that memorial contributions be made to The Alzheimer's Association. Funeral arrangements have been entrusted to Koenig - Belvill Funeral Home & Cremations, 208 W. Pearl, La Grange, Texas. Family and friends can view and sign the guestbook online at www.lagrangefunerals.com .

Dale Lee Holly went to be with the Lord on Friday, December 24, 2021 at his home in Muldoon. Dale was born on August 10, 1946 in Houston, Texas, the son of the late E.A. Holly and Syble (Gunkel) Holly. His childhood years were spent in Riverside,... View Obituary & Service Information

The family of Dale Lee Holly created this Life Tributes page to make it easy to share your memories.

Dale Lee Holly went to be with the Lord on Friday, December 24,...

Send flowers to the Holly family.