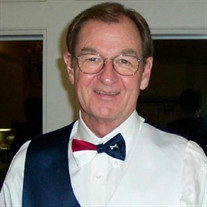 Charles Robert Richardson April 5, 1938 – December 24, 2020 Charles Robert (Bob) Richardson, of Walden on Lake Conroe, passed away on December 24, 2020, at age 82. Born April 5, 1938 to Victor and Maxine Richardson in Kaufman County, Texas, Bob grew up in Texas City, Texas. After graduating from The University of Texas in Austin, Bob spent the next forty years of his life working in higher education. Bob worked as a state auditor, auditing colleges and universities. He served as the business manager at the then West Texas University and at The University of Texas Medical Branch in Galveston. In 1971, he helped start The University of Texas Medical School in Houston. In 1974, Bob moved to Sul Ross State University as chief financial officer and became its eight president at age 39, in 1976. Bob left Sul Ross in 1984, moving back into the medical school arena as Vice President for Finance and Administration at Baylor College of Medicine in Houston. Bob retired from Baylor in 1998. Bob is survived by his wife of 36 years, Sharon, and his four children and their spouses: Elizabeth Richardson, Debbie Few, Michelle Berning (Andy), and Victor Richardson (Belinda). Bob cherished his grandchildren and great grandson: Jessica Shahan and her son Alden, Brittaney Few, A.J. and Matthew Berning, Mateo and John Richardson. The family plans a private celebration of Bob’s life. Bob loved to read, to travel, to build “things” and spend time with his family. While he and Sharon traveled independently for many years, some of his favorite trips involved traveling with groups of their friends from Walden. He loved making short travel videos for his travelling companions of trips they took. He also loved all the kids and grandkids spending time out on Lake Conroe. Bob’s favorite charities were those that worked close to home. The family requests that any donations made in his name be given to charities that support the local community of the donor.

The family of Charles Robert Richardson created this Life Tributes page to make it easy to share your memories.

Send flowers to the Richardson family.