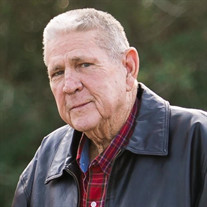 Charles “Charlie” Doyle Lynch was born on August 15, 1941 in Paris, Texas and crossed over into heaven on March 23, 2021 in Huntsville, Texas alongside his loving wife, Katie. Charles is a graduate of Sam Houston State University and earned his Bachelor of Science Degree in Agriculture Sciences. Charles’ passion was working his cows and hay fields. He could often be found riding around in the pasture on his lawn mower to go see his cows. His favorite past time was spending quality time with his Grandchildren. Charles is survived by his wife of 59 years, Katie Louise McDonald Lynch who has been by his side on every venture he led them on. He is also survived by his daughter, Tracy Lynette Lynch Stoudt, wife of Bob Stoudt; daughter Terri Kay Lynch Hall, wife of Glyndol Gail Hall and son Timothy Charles Lynch and wife, Rhonda Adams Lynch. Charles and Katie have six grandchildren, Dustin Riley Stoudt and wife, Abagail Stoudt, Alexa Nicole Stoudt, Baileigh Alyson Hall, Ashleigh Paige Hall, Charles Garrett Lynch and Callie Grace Lynch all of Huntsville, Texas. Papaw had no favorites as he loved everyone just as Jesus loves. He is also survived by sister, Sherry Smoot, brother Bob Lynch and wife Jackie, brother Ralph Lynch and wife, Peggy with numerous nieces and nephews. He was preceded in death by his father Hugh Lynch and mother Gertrude Lynch, sisters Dorothy Franklin and Gertrude Lane, brothers Hugh, James and Hershcel Lynch. Charles was a member of Family Faith Church in Huntsville, Texas where he served many years as Head Usher, Foundations for Faith teacher and papaw to so many people. Charlie was known around town as the Tex-Pack Man. Prior to that he owned the service station on the corner of Sam Houston Avenue and Avenue I from 1964-1972 where he developed a passion for repairing whatever he could. Prior to his passing, he worked as a Warehouse Supervisor for the Texas Department of Criminal Justice Commissary Warehouse from August 2012 through his departure on December 31, 2020. Charlie never met a stranger and he was always there to lend a helping hand to someone in need. Charles’ love for Jesus affected all those who knew him. Visitation will be held on Thursday March 25, 2021 from 5:00 to 8:00 PM at Sam Houston Memorial Funeral Home in Huntsville, Texas. Funeral services will take place on Friday March 26 at Family Faith Church, 2407 Sam Houston Ave., Huntsville, Texas at 10:00am. Interment will follow at McAdams Cemetery in Huntsville. Those wishing to leave memorial condolences for the family may do so at www.shmfh.com.

Charles &#8220;Charlie&#8221; Doyle Lynch was born on August 15, 1941 in Paris, Texas and crossed over into heaven on March 23, 2021 in Huntsville, Texas alongside his loving wife, Katie. Charles is a graduate of Sam Houston State University... View Obituary & Service Information

The family of Charles Doyle Lynch created this Life Tributes page to make it easy to share your memories.

Send flowers to the Lynch family.