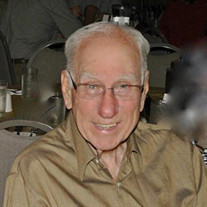 Harry passed away November 16, 2020 in Round Rock, Texas, at a hearty 100+ years, a true member of “The Greatest Generation.” Born January 21, 1920, in Huntsville, Texas, he graduated from Huntsville High School, attended SHSU and Texas A&M where he studied engineering. Harry married the love of his life, Eloise Holcomb of Beulah/Rusk, on July 14, 1940 while they were students at Sam Houston. Harry was fascinated with aviation and decided to join the Aviation Cadet Program while at A&M. He graduated from advanced Bombardier School on Nov 13, 1943 and was commissioned a 2nd Lt in the Air Force. He later became a pilot and flew 35 B-24 missions in War II and dozens of combat support missions in the Korean War. His Air Force active duty career lasted 22 years attaining the rank of Lt Col and Command Pilot before retiring in 1964 to accept a position with the Boeing Company. He completed his education at the University of Puget Sound graduating with honors. Harry spent the next 22 years in the nuclear engineering industry with Boeing, Texas Instruments and other companies in Louisiana and Texas. Despite his career successes, he was most proud of raising two wonderful daughters, Genie and Beth and was devoted to his grandchildren. Harry retired in 1985 to build their award-winning dream home and beautiful gardens on the Fraser family homestead in Huntsville, Texas. He was a man of many personal interests with an appetite for research and for knowledge. He was very active in the Huntsville Genealogy Society following in the footsteps of his mother and sister meticulously researching the family’s many ancestral lines. Harry had a strong faith in God and was a proud and dedicated member of the Huntsville First Methodist Church. He was also active in the Air Force Association, Retired Officers Association, Daedalians Society and the Huntsville Lion’s Club. His favorite team was the Dallas Cowboys and he was a season ticket holder for many years. Harry will be deeply missed by his two daughters, Beth Willis (Dale) and Genie Cook and his two grandchildren, Charles Andrew Cook (Karin and daughter, Dora) and Cory Rebecca Wren (Clif) and two great-grandchildren Gracyn Eloise and Paul Kaden. Harry is preceded in death by his wife, Eloise, his parents, Charles H. Allen and Elizabeth Fraser Allen and sister, Mary Frances Park, who is survived by her son, Mike Park (Carol) and children Mance Allen (Danielle and 2 daughters, Emilee and Parrish) and Paul Michael (Sarah and son Mance Michael). Harry was proud of the many life achievements of his children and grand-children. His family will miss his guidance, his wit, his affection and his presence in our lives. We are who we are because of him. Memorial condolences to the family may be made at www.shmfh.com

The family of Charles Harry Allen created this Life Tributes page to make it easy to share your memories.