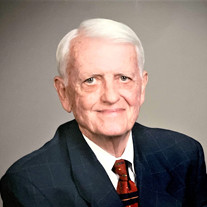 Cecil Crawford Murray, 85, passed away on Monday, March 28, 2022, in Huntsville, Texas. Cecil was born in Huntsville on November 20, 1936, to Cecil Wyatt and Annie Pearl Murray. Cecil graduated high school from Huntsville High School in 1954 where he lettered in several sports in high school. Cecil attended college at Southern Methodist University where he played basketball and was a member of Phi Delta Theta fraternity. After college, Cecil was an entrepreneur in both the retail and restaurant industries, and he spent many years in oil and gas. He was an avid golfer and played many of the world's best courses, including the birthplace of golf, St. Andrew's. He was a scratch golfer for many years and was proud of "shooting his age" when he was 68 years old. Cecil was preceded in death by his parents and by his sister Lenora Ann Murray Powell. He is survived by 2 brothers, Guinn Hugh Murray of Huntsville and Mike Murray and his wife Kathy of Spring, his daughter, Cathy Murray Lewis and husband Fred of Austin, his son, Charles Crawford Murray of Rogers, Arkansas, and grandsons Carter Wilmans Murray and William Joseph Lewis. A visitation for Cecil is planned for Friday, April 1, 2022, from 1:00 pm to 2:00 pm. The visitation will be at the Sam Houston Memorial Funeral Home on 1700 Normal Park Drive, Huntsville, Texas. All are invited to attend. People wishing to honor Cecil can make donations to the First United Methodist Church, 1016 Sam Houston Ave, Huntsville, TX 77320, or to the Alzheimer's Association. Memorial condolences may be made to the family at www.shmfh.com.

The family of Cecil Crawford Murray created this Life Tributes page to make it easy to share your memories.

Send flowers to the Murray family.