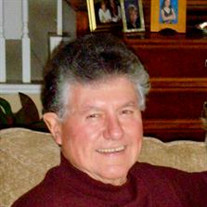 Carlton J. Seidule (Carl) 5/11/1938 - 08/19/2021 Carl Seidule joined his Heavenly Father on the morning of August 19, 2021, leaving many friends, colleagues and family members whose lives he touched. Carl was born in Biloxi, Mississippi on May 11, 1938. He was preceded in death by his parents, Joseph C. Seidule Sr. and Louise Kozlowski; and his siblings, Joseph C. Seidule Jr., Donald Seidule and Joycelyn Sheffer; and his son John Shannon Seidule. Carl is survived by his wife of 31 years, Karla Rankin Seidule. Daughters: Ronda Seidule, Jill Seidule Wylie and husband Rick. Grandchildren: Ashleigh Ackermann Gann and husband Cory, Christopher Chase Wappler and significant other Delaney Moore, and Lexi Wylie (Papa said to tell Stuart he says hi). Great grandchildren: Addison Gann and Audrey Gann. Sisters-in-Law: Kay Rankin Rysavy and husband Larry and Karen Rankin. Also many loving cousins, nieces and nephews. Carl graduated from Michigan State University with a degree in Mechanical Engineering. He began his professional career at Union Pump and transferred with them to Houston, Texas in 1965. He left the company to start a Partnership with Ron Zappe and William Mayfield forming Flow-Quip Inc. in 1970 specializing in pump sales and service for Oilfield and Offshore Industries. After closing Flow Quip he worked at several Engineering firms through out the Houston/Gulf Coast area. He later joined the construction partnership of SER Construction Partners, LLC and retired from there in 2012. He and Karla have enjoyed meeting and making many new and wonderful friends since moving to the beautiful community of Walden on Lake Conroe. Carl was very active in Walden serving for 12 years on the WCIA Board, after leaving the Board he continued serving his community as a member of the Finance Committee. He was still serving on that committee along with being a member of the Board of Section 5 up until his death. He was a member of the Walden Follies where his talents were best utilized in the operation of one of the spot lights and serving on it's board for three years as their Treasurer. The community honored him in 2011 for his contributions by naming him Walden's Citizen of the Year. He enjoyed traveling, sportfishing, playing poker, gin and cooking for and dining out with his wife, family and friends. His biggest joy, however, was spending time with his family. Sunday dinners sitting around the kitchen table where the family enjoyed, and will forever remember, his wickedly good sense of humor and his unique story telling style. He truly was one of a kind and we will all miss him dearly. There will be a Celebration of Life at a date yet to be determined. Should you wish to make a rememberance in his name, please donate to St. Jude Children's Research Hospital or the Charity of your choice. You may leave written condolences at www.shmfh.com

The family of Carl Seidule created this Life Tributes page to make it easy to share your memories.

Send flowers to the Seidule family.