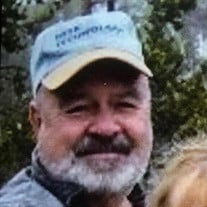 Carey Leon Jordy, 77, of Huntsville, Texas, died on December 2, 2020. He was born April 2, 1943, in Port Sulphur, Louisiana, to James Roger and Effie Lanette (Cabiness) Jordy. He attended Huntsville High School, Huntsville, Texas, before leaving to serve in the U.S. Navy for four years. After his return to civilian life in Texas, Carey worked various jobs including being a private investigator and driving trucks for Caterpillar and Texas Mirror/Gardner Glass. In 1985, Carey and his family returned to his parent’s property in Huntsville, Texas, where he continued his career as a truck driver and began working on obtaining his GED. After receiving his GED, he began working as the groundskeeper for the Sam Houston Memorial Museum, where he remained until his retirement. On June 5, 1998, he married Allyson Lea Jordy in Trinity, Texas. For over 20 years, Carey and Allyson enjoyed each other’s love and company, raised their families, helped in their church, traveled on many adventures, and took in and cared for many people in need. Carey was known for his larger-than-life personality, boisterous laugh, and amazing storytelling. Whether you found him shopping at HEB or working his side job picking up trash in the bank parking lots, he was always up for an audience. However, one of his favorite things was to be sitting in his recliner in the house on the hill of the family property. He loved that property, and so much so that he made sure he got home to that recliner one more time. He is survived by his daughter and her family, Corin, Brett and Blakely Thomlinson of McKinney, Texas, his step-sons and their families; Adam and Heather Winningham of Huntsville, Texas, and Jacob and Zoey Winningham of Newport, Arkansas; and his adopted daughter, Brianna (Bri) Winningham-Jordy of Huntsville, Texas. He is also survived by numerous nieces, nephews, and cousins. He was preceded in death by his father, James Roger Jordy, his mother, Effie Lanette Jordy, his wife, Allyson Lea Jordy, his sister, Shirley Ann Collins, and his half-sister, Susanne Sarson. His viewing will be held at Calvary Baptist Church, 1135 Hwy 190E, Huntsville, Texas, from 9 am to 11 am on Sat. Dec. 5, 2020, immediately followed by a memorial service that will conclude by 12 pm. Arrangements are with Sam Houston Memorial Funeral Home, and condolences can be left at www.shmfh.com. In lieu of flowers, donations made be made to: ALSAC/St. Jude Children’s Research Hospital, www.stjude.org , 501 St. Jude Place, Memphis, TN 38105

The family of Carey Leon Jordy created this Life Tributes page to make it easy to share your memories.

Send flowers to the Jordy family.