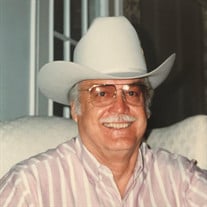 Billy Roy “Bill” Pool, 85, passed away Friday, April 23, 2021 at his home in Point Blank, Texas. Bill was patient, authentic, and loving to all, with a strong faith in God. Bill was born January 8, 1936, in Hamilton, Texas to RV Mason and Francis Pool, later adopted by John Henry Pool. He proudly served the U.S. Air Force from 1954 to 1957 with the 406th Air Expeditionary – Fighter-Interceptor Wing in the UK and North Africa until honorable discharge. Bill married Barbara Karpel in 1957 and returned to Texas to start their family. Soon came 2 sons and then a daughter. He had an extensive career, eventually advancing his way up to President and CEO of Texas Forge, and later becoming partner of Panthera Inc. with his son Gary. Bill was highly respected for his hard work and integrity; traits he instilled in his children. Bill loved the outdoors. He owned "Double B" Ranch in Point Blank, Texas, spending days riding horses, four-wheeling, and raising cattle. He enjoyed boat rides on Lake Livingston, teaching everyone how to ski and fish. His greatest joy was family, and after retirement, Bill traveled the United States visiting everything with his grandchildren and later traveling even more with his current wife Janet. The last of his days were enjoyed watching hummingbirds on the front porch, the Marty Stuart show with his wife, rodeos on TV, and reminiscing on the great life he had experienced with all. Bill is survived by his wife of 15 years, Janet Pool; first wife and mother to his children Barbara Pool; son Leonard Pool and wife Shelly, granddaughter Leah, great-granddaughter Quinn, and grandson Billy; son Gary Pool and wife Terrie, granddaughter Kelly and husband Chris Klentz, great-grandson Preston and great-granddaughter Emily, grandson Jeff Pool and wife Amanda, great-granddaughters Skylynn, Sloan, Jacey and Charlotte; daughter Belinda and husband Randy Rowell, granddaughter Natalie and husband Josh Fink, great-granddaughters Arden and Sierra and grandson Mitchell Rowell and wife Laura, great-granddaughter Juliette and great-grandson Sterling. An open casket memorial will be held on May 1st, 2021 at 10:00 a.m. at Sam Houston Memorial Funeral Home, 1700 Normal Park, Huntsville, TX 77340, with a visitation beginning at 9:00 a.m. In lieu of flowers, donations can be made to the Yellowstone National Park, Bill’s favorite place to visit. Memorial condolences to the family may be made at www.shmfh.com.

The family of Billy Roy "Bill" Pool created this Life Tributes page to make it easy to share your memories.

Send flowers to the Pool family.