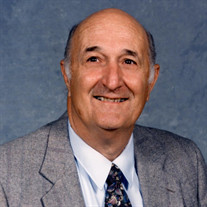 Billy (Bill) Leon Byrd passed away December 13, 2020 after a long illness. He was born in Gladewater, TX on November 13, 1932 to Dalton and Minnie Mae Byrd. He graduated from Gladewater High School in 1952, having participated in football, basketball, and track. He attended East Texas State Teachers College on a track scholarship. His high school sweetheart, Lynda Berryhill, followed him to East Texas in 1954 and they were married May 28, 1955. That same year he was drafted into the U.S. Navy. While in the Navy he was placed on the Navy Track Team. That was the year of the Olympic Trials for the 1956 Olympics. He was proud to be on this unique team and had a lot of interesting stories that he shared. After his regular duties, he worked in the Hobby Shop helping sailors with their projects and teaching leather work. He spent most of his time at the Naval Base in San Diego. His last few months were spent on the USS Shangri-La (CVA-38). After his time in the Navy he and Lynda finished college and moved to Texas City, TX to begin their teaching careers. Billy spent his first three years of teaching at Stephen F. Austin Jr. High in Galveston. The next thirty­ five years were spent with TCISD. He taught at Levi Fry Jr. High, T. C. High School and Blocker Middle School. As most teachers, he had a ton of stories concerning those days. He was a good teacher and he truly cared for all of his students. He taught woodworking, drafting, ceramics, and leather work (tooling of leather for projects). For a short time he coached basketball and football at Levi Fry Jr. High and Blocker Middle School. His last nine years were spent at Blocker Middle School in charge of the SAC program. He also officiated basketball and football games in the area. Billy spent much time encouraging his own children to always do their best, and he followed them in their sports activities and helped when he could. Billy worked extra jobs when Ben Marc was sick with cancer so that Lynda could stay with Ben Marc at M. D. Anderson for weeks at a time. He was a good husband, father, grandfather and provider for his family. He loved his family unconditionally. After their retirement, Billy and Lynda moved to Point Blank, TX where Billy enjoyed fishing and hunting. He did not let those activities interfere with church responsibilities. Since retirement we have been worshiping with the Onalaska church of Christ where Billy served as an elder. Also, Billy became involved with the prison ministry in Huntsville. He was also able, through the church ministry to help support a children's home, (Por Los Ninos), in Honduras. He also helped with financial support through the Onalaska church for Family Life Missions, Inc. that oversees the home. Billy has read the Bible on a regular basis for many years and has enjoyed teaching Bible classes for young students. Billy was preceded in death by his parents; son, Ben Marc Byrd; son, Terry Lynn Byrd; brothers-in-law, Bill Berryhill and David Cline; sister-in-law, Barbara Berryhill; and Lynda's parents, Earl and Mozelle Berryhill. Billy is survived by his loving wife of sixty-five years, Lynda; daughter, Joy Collins and husband, Jerry Dodd Collins Jr.; granddaughters, Tiffany Collins, Lauren Clapp (Matthew); Kelsie Golden (Jacob); great-grandson, Rowan Clapp; sister, Jannette Cline; and many nieces, nephews, family, and friends. A graveside service for Billy Byrd will be held at 1 p.m. Wednesday, December 23, 2020 at the Friendship Cemetery, 22604 County Rd. 3107, Gladewater, TX 75647. Memorials may be made to: Onalaska church of Christ P.O. Box 1058 Onalaska, TX 77360 Family Life Missions, Inc. P.O. Box 332510 Murfreesboro, TN 37133 Friendship Cemetery Association 23393 County Rd. 3107 Gladewater, TX 75647 Gladewater former Students' Association P.O. Box 1425 Gladewater, TX 75647 Or a charity of your choice.

Billy (Bill) Leon Byrd passed away December 13, 2020 after a long illness. He was born in Gladewater, TX on November 13, 1932 to Dalton and Minnie Mae Byrd. He graduated from Gladewater High School in 1952, having participated in football, basketball,... View Obituary & Service Information

The family of Billy "Bill" Leon Byrd created this Life Tributes page to make it easy to share your memories.

Send flowers to the Byrd family.