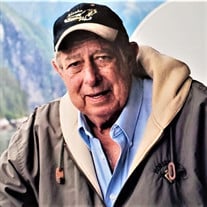 W.A. "Bill" Steiner Jr. passed away August 16, 2021, in Huntsville, Texas. He was born March 5, 1934, to W.A. Steiner Sr. and Roseline Elizabeth Ross Steiner. He is preceded in death by his parents. He is survived by his beloved wife of 65 years, Linda Steiner, brother John Steiner, sister Billie Anne Thompson, son, Ross Steiner and wife Kim, daughter Cindy Dixon, grandchildren Jeff Roberts and wife Summer, Michael Steiner and wife Akemi, David Steiner, Angela Steiner, and Travis Dixon; and great-grandchildren Liam and Elle Steiner, Jace Cooper and Alora Roberts. Bill grew up in Houston, spending much of that time in the automotive shop owned by his Uncle Jay. In his youth Bill greatly enjoyed working on, and racing, anything with a motor, including cars, boats, and motorcycles. He became a gifted mechanic, eventually opening and operating his own automotive repair business, Steiner Automotive, in Houston for over 30 years before retiring to Huntsville. A personal pilot, he also spent many enjoyable hours piloting his Piper Archer. In his leisure time Bill enjoyed traveling extensively with his wife, Linda. They took numerous trips together with favorite destinations being Las Vegas, New Orleans, and Crested Butte. They also took many Alaskan and Caribbean cruises. Bill also greatly enjoyed more local destinations, particularly if they were on the water. An avid fisherman, he took pride in the many trophy bass he caught on Elkins Lake but he particularly enjoyed spending summers at Lake LBJ, in the Texas Hill Country, which he regularly traveled to for over 40 years with his wife, his children, and his grandchildren, spending days swimming, riding jet skis, and taking evening boat rides. Visitation will be Saturday, August 21, 2021, from 2 to 3 pm at Sam Houston Memorial Funeral Home in Huntsville, TX, with services immediately following at 3:00 pm. Interment is to be held following the service at Mayes Addition of Oakwood Cemetery in Huntsville, TX. Memorial condolences to the family may be made at www.shmfh.com. The family is requesting that everyone in attendance please wear a mask.

W.A. "Bill" Steiner Jr. passed away August 16, 2021, in Huntsville, Texas. He was born March 5, 1934, to W.A. Steiner Sr. and Roseline Elizabeth Ross Steiner. He is preceded in death by his parents. He is survived by his beloved wife of... View Obituary & Service Information

The family of Bill Steiner created this Life Tributes page to make it easy to share your memories.

Send flowers to the Steiner family.