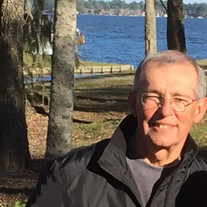 Dr. Bart Paul Hartman, Jr, 77, passed away Saturday, April 17, 2021, in The Woodlands, Texas. He was born on August 18, 1943, in Chicago, Illinois. Bart graduated from St. Catherine High School in Racine, Wisconsin in 1961. He received his Bachelor of Science degree from University of Wisconsin, a Masters degree from Northern Illinois and earned his Doctorate of Philosophy in Accounting at the University of Kentucky. Bart was a Professor of Accounting at several universities, including Louisiana State University for over twenty years, St. Joseph’s University in Philadelphia, Pennsylvania for ten years and Harvard University for three memorable summers. He authored several accounting textbooks which were widely adopted in accounting classrooms. While at St. Joseph’s he was honored to hold the Edward G. Sutula Chair of Accounting and helped build and grow the Sutula Scholar’s Program in his time there. Bart impacted thousands of students in his academic career and enjoyed sharing real-world experiences with them through presentations with executives and trips to the New York Stock Exchange. In 2006, Bart moved to Texas to be closer to family and enjoy retirement. Many memories were made enjoying a good game of golf, spending time on the lake, attending grandkids sporting events and recitals and traveling for vacations. He was a devoted husband, loving father, and an exceptional grandfather (Papa). He will be remembered as a supporter, encourager and true friend. Bart was loved beyond measure and will be dearly missed by all. Bart/Dad, you have fought the good fight long enough and can now rest in peace. 2 Timothy 4:7 Bart was preceded in death by his parents, Bart Paul Hartman, Sr. and Rose A. Hartman, and his first wife, Elizabeth Anne (Betsy) Hartman. Bart is survived by his wife Melinda Hartman, son Bart Paul Hartman, III “Trey”, daughter-in-law Crystal Hartman and his two grandchildren, Kyle Andrew Hartman and Lauren Elizabeth Hartman. He is also survived by siblings: Rosemary (Bill) Dorece of Liberty Township, Ohio; Joseph (Josie) Hartman of Cumming, Georgia; Larry (Brenda) Hartman of Houston, Texas; and Betsy Horvath of Racine, Wisconsin and many nieces, nephews, and friends. A Memorial Service will be held Wednesday, May 5, 2021 at 1pm at Sam Houston Memorial Funeral Home in Willis, Texas. In lieu of flowers, the family has suggested memorials to St. Jude Hospital, Cure PSP (www.psp.org), or the charity of your choice. You are invited to leave a written condolence on our website at www.shmfh.com.

Dr. Bart Paul Hartman, Jr, 77, passed away Saturday, April 17, 2021, in The Woodlands, Texas. He was born on August 18, 1943, in Chicago, Illinois. Bart graduated from St. Catherine High School in Racine, Wisconsin in 1961. He received his... View Obituary & Service Information

The family of Bart Paul Hartman Jr. created this Life Tributes page to make it easy to share your memories.

Send flowers to the Hartman family.