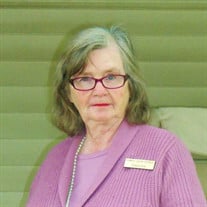 Barbara Genette Baker, age 80, passed away March 27, 2021. She was born March 15, 1941 in Houston, Texas to Otis Wilson Shaw and Lois Sims Shaw. She was raised in Baytown by her loving aunt, graduating from Robert E. Lee High School in 1959. She eventually moved to Willis / New Waverly and established this area as her home for the remainder of her life, raising two sons with husband John Fanestiel. She then married Marvin Richard Baker and had her third son. Richard passed in 1990, leaving Barbara to raise her youngest son as a single mother. In her later years, Barbara was blessed to have met Tony Yorek, her companion who shared her love of flowers, gardening, and family. Barbara was a Christian who loved God, always putting Him first. She loved her family very much and will be missed dearly by everyone whose life was touched by her. She was happiest when talking about her family, working in her many flower gardens, reading, or spending time with church activities. For Barbara, family wasn’t blood- family to her was more than that. Her cousin Genette was more like a sister than a cousin and Miss Betty was more family than some blood family. That is just how Barbara was. She is survived by her son Fred Fanestiel, Sr. and wife Sheree; daughter-in-law Pamela Fanestiel; son Daryl Baker and wife Missy; step-children through Richard Baker; sister Ellen Schultz; sister Mary Webb and husband Earl; brother Douglas Shaw; sister Helen Hilton and husband Robert; brother Phil Dutton and wife Bonnie; sister Sue Morgan and husband Havis; 9 grandchildren; 7 great-grandchildren; cousins; and many other relatives and friends. Barbara was preceded in death by her husband Marvin Richard Baker, son Edward Fanestiel, and grandson Christopher Graham. Join us in a celebration of her life. Visitation is scheduled with the family for Monday, April 5th at 9:00 AM at Sam Houston Memorial Funeral Home in Willis, Texas. Brother Russell Hayes of Abundant Faith will lead the celebration at 10:00 AM after visitation. Burial will follow services at Antioch Cemetery in Lovelady, Texas.

Barbara Genette Baker, age 80, passed away March 27, 2021. She was born March 15, 1941 in Houston, Texas to Otis Wilson Shaw and Lois Sims Shaw. She was raised in Baytown by her loving aunt, graduating from Robert E. Lee High School in 1959.... View Obituary & Service Information

The family of Barbara Genette Baker created this Life Tributes page to make it easy to share your memories.

Send flowers to the Baker family.