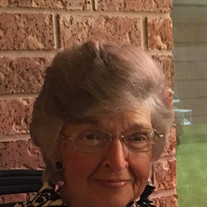 Augusta Raye Goodrum, 90, of Huntsville, Texas, passed away on February 20, 2021 in Huntsville. Graveside services will be held Wednesday, February 24th at 3:00 p.m. at the Adickes Addition of Oakwood Cemetery on Martin Luther King Dr. Augusta, or Gus as she was known to most, was born in Huntsville, Texas to Jack and Nettie Jordan on September 28, 1930. She was a proud graduate of Huntsville High School Class of 1947. She graduated from Sam Houston State Teacher’s College with a Master’s Degree. During her college years, and even later on, she was very involved in Beta Sigma Phi Sorority. After graduation she began her teaching career in Alvin, Texas where she taught grade school. On June 20, 1959, she married Rayford Gene Goodrum in Huntsville. She attended Calvary Baptist Church faithfully where her parents were charter members. Her career as a teacher continued at Willis Independent School District. Her profession as a teacher afforded her time off in the summer for annual family vacations, usually for two weeks which always included extra family members such as nieces and nephews. Great memories were also made with family during the holidays while she and Gene hosted family gatherings. She touched many lives over 30 years through teaching typing, shorthand and bookkeeping. She retired after 32 years of service. After retirement Gus kept herself busy with family. She also enjoyed attending church and celebrating special occasions with friends and family. She continued to be in close contact with her Class of ’47 classmates by attending reunions. She was a devoted grandmother to her grandchildren and great grandchildren. They were the light of her life and she could spend hours telling you of their accomplishments. She will be greatly missed by them and many others. She was preceded in death by her husband, Gene, of 55 years. Her parents, Jack and Nettie Jordan. Brothers, Bill Jordan, J.C. Jordan, Fred Jordan, niece Becky Beaird, son-in-law Mike Jensen and grandson Daniel Harding. She is survived by daughter, Rhonda Jensen. Grandchildren, Justin Harding and wife Lauren, Lindsey Davidson and husband Daniel and Lacy Harding. Great grandchildren, Brayden Davidson and Tinley Harding, numerous nephews, niece and other family members. The family would like to express their thanks to Divine Life Change staff for her comfort and care during the past year. Donations may be made in her name to Calvary Baptist Church, Huntsville, Texas. Condolences to family may be made at www.shmfh.com

The family of Augusta Goodrum created this Life Tributes page to make it easy to share your memories.

Augusta Raye Goodrum, 90, of Huntsville, Texas, passed away on...

Send flowers to the Goodrum family.