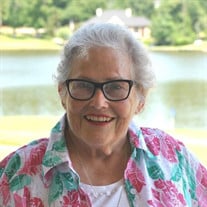 Ann Merritt Choate Burrow was born July 23,1936 in New Orleans, LA to Paul and Sarah Merritt. Ann passed away on January 14, 2021. She is preceded in death by her first husband the Rev. Karl M. Choate, her sister Jane Burrow, and later in life by her second husband Don Burrow. She is survived by her children, Kathie Richard, Paul and Mona Choate, and Jack and Debbie Choate. She was grandmother to Russell and Melissa Richard, David and Shannon Richard, Stephanie Choate, Jennifer Choate, Christopher Choate, Abigail Choate, and Emilie Choate. She was the great-grandmother to Cheyanne Glueck, Glenna Richard, Arthur Richard, and Edwin Richard. She is also survived by her nieces and nephews/bonus children Allison and Byron Callan, Cynthia and J. Kenneth Lota, and Richard and Sandra Burrow; Ann is also survived by her sister and brother-in-law, Travis and Lyn Boyd, and their children, Travis Boyd, Jr., the Rev. Dr. Kevin and Carlette Boyd, and Kendall and Kimbo Boyd. Karl and Ann served many episcopal congregations around the state of Texas and made many dear friends along the way. She was active and devoted to the Episcopal Church, and particularly the altar guild and the Daughters of the King. In Huntsville, Ann enjoyed attending the Huntsville Rotary Club each week with Don, and was a Paul Harris Fellow. Ann also enjoyed other activities including golf and the Elkins Lake Frog Squad. Ann was fortunate to travel all around the world, but mostly she loved her time with family, and never failed to proudly announce with her contagious smile, “Isn’t it nice we can all be together?!” In lieu of flowers, please consider a donation to any of the following: Episcopal Relief & Development P.O. Box 7058 Merrifield, VA 22116-7058 Good Shepherd Mission P.O. Box 7281 Huntsville, TX 77340 Boys and Girls Club of Walker County PO Box 8600 Huntsville, TX 77340 Rita B. Huff Humane Society 530 Bearkat Blvd. Huntsville, TX 77340 Camp Allen of the Episcopal Diocese of Texas 18800 FM 362 Navasota, TX 77868

Ann Merritt Choate Burrow was born July 23,1936 in New Orleans, LA to Paul and Sarah Merritt. Ann passed away on January 14, 2021. She is preceded in death by her first husband the Rev. Karl M. Choate, her sister Jane Burrow, and later in life... View Obituary & Service Information

The family of Ann Choate Burrow created this Life Tributes page to make it easy to share your memories.

Send flowers to the Burrow family.