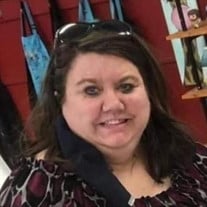 Angela Fannin Sanderson, 45, went to be with her Lord on Tuesday, September the 14th, 2021 after a courageous fight with cancer . Angela was born on May 7, 1976 in Houston, Texas, the first-born of three children. After graduating Cum Laude from Jersey Village High School, she attended Sam Houston State University and earned a B. S. in Psychology. While at Sam Houston State, she met her husband Barre. Their close friendship soon turned to love and they were married in 1997. Soon, the Lord blessed them with two boys. After graduation, she began working with the Texas Department of Criminal Justice as an accountant, where she remained for 22 years. She was known by her co-workers as very hard working, kind-hearted, and a team player. Angela was a faithful member of the Huntsville Church of Christ for 24 years. She was a Sunday school teacher and enjoyed helping with youth activities. She was a devoted wife and mom. Her relationship with Jesus and her family were more important than anything else. She was very active as a band mom and her son's biggest cheerleader at ball games. She was happiest when she was volunteering and encouraging her sons' interests. Everything that she did sprang from her love of Jesus Christ and her love for her family and friends. Angela is survived by her devoted husband of 24 years, Barre Sanderson; her son, Gregory Sanderson and his wife, Dana; her son Joshua Sanderson; her parents, Darrell and Beverly Fannin; her sister Christy Hailey, husband Robert, and their son Daniel; her brother Robert Fannin and his wife, Abigail; and father-in-law Virgle Sanderson. She is also survived by numerous aunts, cousins, and friends. The family will receive friends from 4-6pm on Saturday, September 18, 2021 at Sam Houston Memorial Funeral Home in Huntsville, Texas. Funeral services will be held at 3pm on Sunday, September 19, 2021 at Huntsville Church of Christ. Memorial condolences may be made to the family at www.shmfh.com.

The family of Angela Fannin Sanderson created this Life Tributes page to make it easy to share your memories.

Angela Fannin Sanderson, 45, went to be with her Lord on Tuesday,...

Send flowers to the Sanderson family.