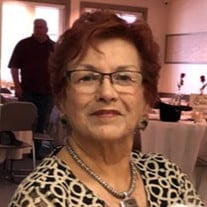 Amy Thorn (Amelia, Mom, Gango) was born in Weslaco, Texas on July 30, 1945 and passed away on December 30, 2020 at the age of 75. She is survived by her son-in-law, David Branstetter and grandsons Jonathan and Matthew; her son Mark Thorn, his wife Ana, her granddaughter Nicole, her husband Zack Odom, their son Zealand and granddaughter Brook; her daughter Raquel Lewis, granddaughter Sheridan, her husband Justin Ferguson, their daughters Mykenzie and Emberley, her grandson Treston, his wife Paige, their son Cooper and grandson Suede; her son Trevor Thorn, his wife Michele, granddaughters Kacie and Julian, grandsons Cole, Grant and Brock. Amy was preceded in death by her husband, Luther Thorn, stepdaughter Dawn Branstetter; brother, Jerry Trevino; and parents Amelia and Geronimo Trevino. Amy always had the most positive attitude; she would do or give to anyone in need. Those who knew her husband and their three children understood her necessity for a positive attitude, especially during her children’s teen years. She deeply loved her family, church, friends and customers. Amy truly loved being a hairdresser, a career she held for fifty plus years. It was through this career she developed many close and lifelong friendships. Amy served her community through the Elks Lodge as an active member holding different officer capacities since April 2003. If she was not engaged with work or with the Elks Lodge, she shared her time on the board of the Walker County Housing Authority. She was appointed to the board by Commissioner’s Court in February of 2011, was elected as Vice Chairperson in July 2014 and has served as Chairperson since March 2017. If this wasn’t enough there was a good chance in her spare time, she was running errands or taking care of someone in need from the shop. It is safe to say she loved helping others. As an avid gardener, Amy used her green thumb in her early years to own and operate a small nursery with her husband Luther. This love of plants and gardening she carried throughout her life and shared with her friends and family any chance she got. Ecclesiastes 9 tells us to embrace the days God gives us and live them all to the fullest. Amy certainly did that as she was not one to rest. She was always on the go and doing for others. When the grandchildren came along they called her “Granny Go”. As grandchildren often do, they shortened her name and she became “Gango”. She was often told by many that she needed to rest, to which her response was “There is time to rest when you die”. She is resting peacefully now, healthy and happy in the arms of Jesus and her beloved Luther. Memorial Services will be held for Amy Thorn on Saturday, January 30, 2021 at 2pm at Second Baptist Church in Huntsville, Texas. In lieu of flowers, the family is requesting any donations be made at https://www.gofundme.com/amy-thorn. All donations received will be donated to Huntsville Elks Lodge and other charities. Memorial condolences may be made at www.shmfh.com

Amy Thorn (Amelia, Mom, Gango) was born in Weslaco, Texas on July 30, 1945 and passed away on December 30, 2020 at the age of 75. She is survived by her son-in-law, David Branstetter and grandsons Jonathan and Matthew; her son Mark Thorn, his... View Obituary & Service Information

The family of Amelia "Amy" Thorn created this Life Tributes page to make it easy to share your memories.

Send flowers to the Thorn family.