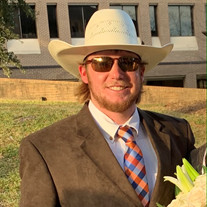 Alan Mark Gehovak was born on October 10, 1995 in The Woodlands, Texas. He passed away unexpectedly at his home in New Waverly, Texas on Saturday September 18, 2021. Alan, affectionally known as Baby Alan, was fun loving, outgoing and the life of the party. His blue eyes, bright smile and quick comebacks will be greatly missed by all who knew and loved him. Alan played Little League and baseball at Willis High School where he graduated in 2014. Alan also showed animal projects at Montgomery County Fair and several Major Show venues. He was a member of Champion 4-H and Willis FFA until he graduated. The Frio River was one of Alan's favorite places to go since childhood and he visited several times throughout the year with his family and friends. Attending BBQ Cookoffs was a favorite hobby of his where he formed many friendships over the years. Alan had a great love for the outdoors and enjoyed hunting and fishing with family and friends. He also loved to check on so many in our community-young and old to see how they were doing. His many trips "around the block" in the golf cart will always bring smiles to our faces. An avid Dallas Cowboy and Texas Longhorn Fan, Alan faithfully followed them through wins and losses. Alan loved country music, especially the older songs. He loved vintage western shirts, starched jeans, and a new pair of boots. At one time Alan considered being a Rodeo Cowboy until he sat on the Bronc, nodded his head and said, "Okay boys". While in High School, Alan worked at Walker Feed Store. After graduation he worked for Montgomery County Pct 1 in various positions until fall of 2020. He then attended lineman school at Texas A&M Engineering Extension Service in College Station. After completing the requirements of TEEKS, Alan was promptly hired by North Houston Pole Line where he was employed at the time of his death. Alan made a profession of faith in Jesus Christ and was baptized by Pastor Randy Weaver at Lone Star Cowboy Church. Alan loved the Lord and he enjoyed learning and sharing scriptures. It is the steadfast hope in eternal life that has given the family strength and peace during this very difficult time. Alan is survived by his parents Steven and Cheryl Gehovak, brother Shane Gehovak and sister Shelby Gehovak, along with Uncles, Aunts, Cousins, and friends who love him dearly. Pallbearers: Heath Backhus, Kyle Backhus, Dylan Castleshoudlt, Cole Floyd, Coleman Godfrey, Josh Jordan, Spencer McClure and Gunter McDonald. Honorary Pallbearers: Tommy Gehovak, Justin Ryder, Burk Backhus, Robert (Bubba) Snoe and Gary McClure. Do not fear for I am with you. Do not be dismayed, for I am your God. I will strengthen you and help you. Isaiah 41:10

Alan Mark Gehovak was born on October 10, 1995 in The Woodlands, Texas. He passed away unexpectedly at his home in New Waverly, Texas on Saturday September 18, 2021. Alan, affectionally known as Baby Alan, was fun loving, outgoing and the... View Obituary & Service Information

The family of Alan Mark Gehovak created this Life Tributes page to make it easy to share your memories.

Send flowers to the Gehovak family.